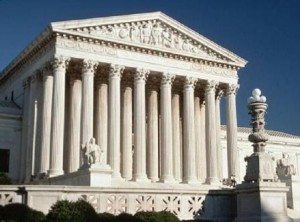 WASHINGTON — After months of speculation about how it might alter affirmative action in college admissions, the U.S. Supreme Court on Monday opted for a more cautious course by sending the Fisher v. University of Texas case back to lower courts for additional review.

As a result of the decision, experts say colleges should be able to continue using race as a small factor in admissions for the short term. But they will have to approach the issue even more carefully. UT President Bill Powers indicated his school will stay the course on its policy.

“Today’s ruling will have no impact on admissions decisions we have already made or any immediate impact on our holistic admissions policies,” said Powers, who added that the school would continue to defend the policy against Fisher’s lawsuit.

In its 7-1 ruling, the Court said that the Fifth Circuit Court of Appeals did not apply to the Texas plan the “strict scrutiny” required for policies that utilize race in admissions. “Strict scrutiny must not be strict in theory but feeble in fact,” said Justice Anthony Kennedy in issuing the ruling.

In the case, plaintiff Abigail Fisher claimed that she was denied admission to the university because she is White. Fisher’s attorneys also argued that Texas already had a policy to encourage diversity — its plan to grant admission to any student who finishes in the top 10 percent of his or her high school class.

But the university said that policy alone was not sufficient to promote diversity and sought to employ race as a small factor in making admissions decisions.

The only dissenter in the case was Justice Ruth Bader Ginsburg, who said the Court should have upheld the Texas policy and not returned it for further review. She noted that race is already a factor in the state’s 10-percent admissions plan, given the segregation of many Texas neighborhoods and communities.

“I have said before and reiterate here that only an ostrich could regard the supposedly neutral alternatives as race unconscious,” she wrote.

Civil rights groups had said they faced an uphill battle in this case, in part, because Judge Elena Kagan, an appointee by President Obama, recused herself because she had served as U.S. solicitor general at the time of the Fisher suit. The Obama administration had filed a brief supporting the University of Texas policy.

In issuing its decision, the Court cited its ruling in the last major affirmative action case before the high court, Grutter v. Bollinger in 2003. In that ruling, the court said colleges and universities could use race as a small plus factor in admissions but that an admissions policy using race as part of a strict point system is unconstitutional.

U.S. Education Secretary Arne Duncan indicated the Obama administration was pleased with the court’s ruling. The decision “preserves the well-established legal principle that colleges and universities have a compelling interest in achieving the educational benefits that flow from a racially and ethnically diverse student body, and can lawfully pursue that interest in their admissions programs,” Duncan said. “As the Court has repeatedly recognized, a diverse student enrollment promotes cross-racial understanding and dialogue, reduces racial isolation and helps to break down stereotypes.”

Others were cautious in their analysis of the decision.

“It’s interesting that seven justices essentially agreed not to make a clearer and more definitive statement,” said Benjamin Reese, president of the National Association of Diversity Officers in Higher Education.

For proponents of affirmative action, one positive point is that justices did not dismiss the need for broad diversity in higher education.

The ruling “appears to not really say anything critical about the value of diversity,” Reese said.

One analyst who seeks to improve college admissions decisions said he welcomed the ruling.

“I think the Supreme Court made the right decision here,” said Juan Gilbert, a Clemson University professor and creator of Applications Quest, a software system to help colleges and universities enroll diverse classes of students without formal preferences.

Applications Quest clusters qualified college applicants based on similar academic records and test scores, a “holistic” approach through which, he says, colleges can promote diversity without formal preferences or point systems.

The challenge for Texas may be that it cannot provide evidence that its policy is “narrowly tailored” on the issue of race, he told Diverse. Yet programs such as Applications Quest can provide “another level of scrutiny” by taking a group of qualified applicants and comparing them against each other.”

The Fisher decision is likely not the current court’s last ruling on affirmative action, however. Earlier this year, it agreed to take on an affirmative action case from Michigan. That state’s voters in 2006 approved a ban on the use of preferences in college admissions, but the Sixth Circuit Court of Appeals ruled in 2012 that such a ban is unconstitutional.

The Supreme Court is expected to hear arguments in the Michigan case this October.