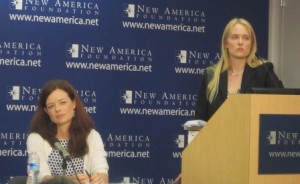 Amy Laitinen of New America Foundation, right, moderates a panel that included Iris Palmer of the National Governors Association in a discussion of a report that identified some “barriers to postsecondary attainment.”

WASHINGTON — If the United States is to reinvigorate and sustain its global economic competitiveness, it must overcome challenges with American teenagers and high school graduates having weaker basic skills than their peers in other countries, a disorganized and confusing set of career education paths and options for young people and relatively high financial risks that students and their families can incur while investing in postsecondary education.

A report, titled A Skills Beyond School Review of the United States, produced by the Organization for Economic Co-operation and Development (OECD) identifies these three factors “as barriers to postsecondary attainment” in the U.S. These barriers can particularly inhibit the attainment of what the report focuses on as “postsecondary ‘career and technical education’ (CTE), career-focused associate degrees, postsecondary certificates, and industry certifications.”

On Wednesday, the Washington-based New America Foundation think tank convened OECD officials, U.S. Department of Education administrators, labor market experts and others in a forum to present and assess the findings and recommendations in the just-released Skills report. The report recommends building on the distinctive strengths of the U.S. postsecondary system and urges institutions to focus on increasing “quality, coherence, and transparency” in their programs that simplify education and career options for high school graduates and adult workers.

Considered the fastest growing segment of U.S. higher education, career and technical education will be required for one in three American jobs a decade from now, according to the New America Foundation. In describing CTE challenges, the report documents that “rising tuition costs, widely varying quality standards, and the growth of for-profit and online alternatives have introduced sizeable risks and complexities” for students and their families.

“The question is less ‘Is college worth it?’ and more ‘Which credential, in which field, and at what price?’ And I think that’s one of the points in this report that’s really interesting. It’s the variability in our credentialing system,” Amy Laitinen, the deputy director for higher education at the New America Foundation, said in opening remarks during the forum marking the OECD Skills report release.

Dr. Brenda Dann-Messier, the assistant secretary in the U.S Education Department’s Office of Vocational and Adult Education, said that her office, along with the National Center for Education Statistics, commissioned the OECD, an international organization founded to stimulate economic progress and world trade, to develop the Skills report to generate “a better understanding of how our system compares to other countries.”

“We’re hopeful the Skills Beyond School report will provide the foundation for continued discussions among key stakeholders across government, education and the private sector,” she said.

Dann-Messier stressed that “postsecondary career and technical education is not something separate and fundamentally different from the rest of higher education.”

Among the report’s recommendations, federal student aid under Title IV of the Higher Education Act “needs to be linked to stronger and more consistent quality assurance” in CTE programs. Other recommendations include institutions developing better data, strengthening career counseling and making greater use of work-based training.

Simon Field, a report co-author and project leader in the OECD Directorate for Education and Skills, said the report addresses CTE issues that are common to industrialized nations, as well as dilemmas pertinent largely to the U.S. In addressing the U.S.-based challenges, the report includes “some measures to encourage reassurance about quality and greater coherence in a highly decentralized system,” Field noted.

University Fee Policy Set For Revamp, But Not Everyone’s on Board