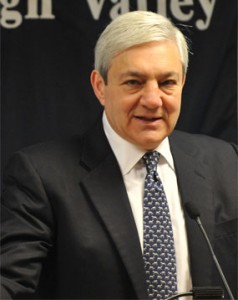 Former Penn State President Graham Spanier had testified to a grand jury that he was unaware of the 1998 investigation of Jerry Sandusky.

HARRISBURG, Pa. — Penn State’s ex-president and two former top school administrators were ordered Tuesday to stand trial on charges accusing them of a cover-up in the Jerry Sandusky child sex abuse scandal, a court ruling that promises to prolong the media attention and court battles casting a shadow over the university.

Wenner called it “a tragic day for Penn State University.”

The men engaged in a “conspiracy of silence,” the lead state prosecutor, Bruce Beemer, said during his closing argument. They covered up their failure to tell police about a 2001 allegation that Sandusky was molesting a boy in a university locker room shower, despite knowing that police investigated complaints about Sandusky showering with boys in 1998, Beemer said.

“When they were finally asked about (the 1998 investigation), it was 2011 and what happened in the interim?” Beemer said.

The key testimony centered on a series of emails among the three defendants that discussed the 1998 and 2001 cases and the account of Mike McQueary, a former team assistant and quarterback who said he had immediately told Schultz, Curley and the late longtime football coach Joe Paterno that he had seen Sandusky molesting a boy—dubbed Victim 2 in court documents—in the shower in 2001.

Sandusky’s conviction includes charges for molesting the boy known as Victim 5 in court papers in those showers a mere six months later, sexually abusing Victim 3 around the same period and molesting Victims 1 and 9 in later years.

Sandusky, a defensive coordinator under Paterno until his retirement in 1999, was convicted last year of 45 counts of child sexual abuse and received a 30- to 60-year state prison term. He maintains his innocence and is appealing.

Anthony Lubrano, a Penn State trustee who watched the two days of testimony, said he had not expected Wenner to throw out the case, given the low level of evidence necessary to send the case to trial. However, he said, “if you get an unbiased jury (at a trial), it’ll be hard to get those charges to stick.”

Maribeth Roman Schmidt, a spokeswoman for the alumni watchdog group Penn Staters for Responsible Stewardship, said it was premature to comment in detail because testimony wasn’t offered in its entirety at the preliminary hearing.

“We’re in full support of due process, uncovering all the facts and the truths related to the case,” she said. Her group has been critical of the decisions of trustees during the outbreak of the scandal in November 2011, including Paterno’s firing and how it was handled.

Spanier testified to a grand jury that he was unaware of the 1998 investigation while Curley and Schultz testified that McQueary reported only that Sandusky and the boy were engaged in naked, inappropriate horseplay that made him uncomfortable. Once the defendants became aware of an investigation into Sandusky in 2010 or 2011, they did nothing to stop it, obstruct it or hide evidence, their lawyers said.

“What was reported (in 2001) was not a report of any activity that was sexual in nature,” Spanier told the grand jury in testimony read aloud in court Tuesday. “I know better than to jump to conclusions about things like that.”

The three were charged with perjury, obstruction, endangering the welfare of children, failure to properly report suspected abuse and conspiracy. Those charges include allegations of hiding evidence from investigators and lying to the grand jury.

Spanier’s lawyer, Elizabeth Ainslie, told Wenner that the case against him “amounts to innuendo and far-fetched inference.” Meanwhile, Curley’s lawyer, Caroline Roberto, took aim at McQueary, saying his testimony included “embellishment” and that every time he testifies he says “something more or different.”

On Monday, McQueary also testified that Paterno criticized Penn State’s handling of the Sandusky allegation and Paterno warned him that school officials would try to make him a scapegoat.

Penn State and the Paterno family declined to comment.

Curley and Schultz were initially charged in November 2011, when Sandusky was arrested, and accused of perjury and failure to properly report the incident.

Spanier was forced out as president at that time. A year later, he was charged with covering up a complaint about Sandusky while additional charges were filed against Curley and Schultz. Spanier remains a faculty member on administrative leave.

Paterno was fired and died in January 2012.

For Penn State’s scandal-weary denizens, some no longer follow the criminal case and simply hope the spotlight will go away, while others who were aware of Tuesday’s ruling were indifferent.

Keisha Odunze, 21, a Penn State graduate headed to medical school in State College, said she thought the administrators took part in a cover-up, but was anxious to see the case move to trial to reach a resolution.

“I feel everyone has taken their sweet, old time and the victims and the victims’ families want to hear something … right now because their children were affected,” Odunze said. “I feel the least they could do is take it to trial to get a verdict.”

Odunze said a trial also offers Penn State an opportunity for vindication should a jury acquit the defendants.