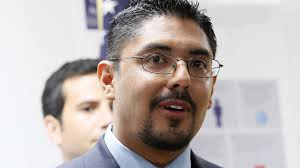 Sergio Garcia has worked in the fields, attended community college, studied to become a paralegal and passed the California bar on the first try.

SAN FRANCISCO — Sergio Garcia arrived in the U.S. illegally 20 years ago to pick almonds in the field with his father. But that was not all he wanted for his life.

Working the fields and at a grocery store, he attended community college, studying to become a paralegal, and passed the California bar on the first try, a boast Gov. Jerry Brown, former Gov. Peter Wilson and nearly 50 percent of all first-time test takers can’t make.

Now, still living in the U.S. illegally, he will ask the California Supreme Court on Wednesday to license him. He has the support of the state bar and California Attorney General Kamala Harris. The U.S. Department of Justice, however, is trying to block his request.

The DOJ argues in court filings that granting Garcia a law license card would violate a federal law barring people in the U.S. illegally from receiving government benefits. The agency argues the state Supreme Court and California bar officials use public money to license and regulate Garcia’s practice.

“It was a real slap in the face,” Garcia said.

The dispute is the latest high-profile immigration clash between state and federal laws. Usually, it’s the Obama administration opposing state laws in Arizona and elsewhere thought to be anti-immigrant.

The Obama position surprised some, since it had recently adopted a program that shields people who were brought to the U.S. as children, graduated high school and have kept a clean criminal record from deportation and allows them to legally work in the country.

At 36, Garcia is too old to qualify for the Obama program. But he and the immigration groups supporting Garcia argue that he his is exactly the type of candidate the Obama administration had in mind when it adopted its program.

So the administration’s flat-out opposition stunned Garcia, who self-financed his education at Cal Northern School of Law in Chico while working at a grocery store and publishing a self-help book in 2006.

“I was very upset by” the administration’s position, he said. “I worked hard and have never been a burden to the state.”

But legal scholars and others say Garcia faces a number of obstacles even if he wins his law license.

Garcia will have to work for himself because no law firm or other employers could legally hire him. And he may be automatically disqualified from representing certain clients and taking on some types of cases because of his citizenship status.

“Garcia is not qualified to practice law because he continually violates federal law by his presence in the United States,” former State Bar prosecutor Larry DeSha told the state Supreme Court in one of the few “friend of the court” briefs filed opposing Garcia’s licensing.

A similar case is brewing in Florida. That state’s Supreme Court has so far refused to certify a person living illegally in the U.S. as a lawyer, but has not issued a final ruling. The California Supreme Court has 90 days to rule after Wednesday’s arguments.

Garcia and his numerous supporters argue that he is deserving of his law license on legal and moral grounds.

State Bar officials and California’s attorney general argue citizenship status is not a requirement to receive a California law license. Garcia said he’s deserving to practice law in the state for those legal reasons, plus the hard work and dedication he put into passing the bar examination.

Meanwhile, the immigration groups backing Garcia’s bid in the Supreme Court say the man’s narrative is exactly the type of immigrants the Obama administration had in mind when it adopted a policy last year to allow people who were brought to the U.S. illegally as children to work legally.

Garcia first came to the U.S. with his family from Mexico when he was 17 months old. He returned to Mexico with his mother when he was 9-years-old and returned eight years later and applied for citizenship in 1994, sponsored by his father who is now an American citizenship.

Garcia said there is nothing unusual about an application pending for so long and estimates it could take another five years to approve given the backlog of applications.

He said he doesn’t fear deportation because of the national notoriety his case has received and the fact that he has formally notified immigration officials of his prolonged presence in the U.S.

What he does worry about is being barred from practicing law in California. In the meantime, he has supported himself as a motivational speaker and paralegal when he can find the work.

“There have been some dark days,” he said. “But I’m looking forward to finally presenting my case to the Supreme Court.”

The rising cost of MBAs