Panel Says There Should Be No Question About HBCUs’ Relevancy 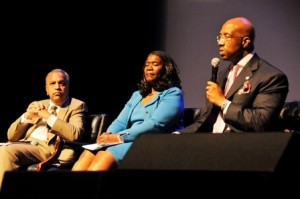 WASHINGTON — Historically Black colleges and universities (HBCUs) continue to play a key role in the nation’s higher education landscape despite the emerging debate in political and academic circles over their relevance, a panel of HBCU presidents declared Thursday. A top White House aide echoed their sentiments.

Participating in a President’s Forum at Howard University as part of the annual “More Than a Game” weekend of events tied to Saturday’s football game between Howard and Morehouse College, the executives were united in expressing concerns about the growing debate about the relevance of their institutions.

“It’s the wrong question, not a relevant question,” said Dr. Sidney Ribeau of Howard, who joined his colleagues in expressing dismay that HBCU relevance would be seriously questioned.

“HBCUs continue to be a vital economic engine,” said Harrell, offering brief comments at the start of the program.

The nearly two-hour session, held on the Howard campus, came at a time when HBCUs seem under a steady stream of attack from a variety of fronts.

Public institutions are losing millions of dollars in annual state funding as state governors and legislatures slash tax allocations for public education. The federal government is cutting spending by 5 percent across the board, a move that alone costs Howard some $22 million for the coming fiscal year beginning October 1. The federal government is also tightening financial aid programs, making it harder, if not nearly impossible, for some families to afford to help pay for college for their children.

Meanwhile, there is a growing chorus of commentaries suggesting the societal need for HBCUs, rooted in efforts to provide post Civil War higher education opportunities for Blacks in the era of racial segregation in America, has passed. Some cite the election of Illinois Senator Barack Obama as president of the United States as a prime example of the national progress that has been made in society in general and higher education in particular. President Obama is a Harvard Law School graduate and the first Black elected the nation’s chief executive.

“The question is how have we survived with limited resources and still produced students who are great?” said Dr. Glenda Baskin Glover, president of Tennessee State University, asserting those raising questions about the relevancy of HBCUs have no case to back their questions.

Responding to skeptics of all races who question whether Tennessee State and its peers can embrace the racial diversity they have demanded of others for decades, Glover said HBCU’s “have always had open arms.” She assured the listeners becoming “more diverse doesn’t destroy our history, who we are.”

Michael Sorrell, president of Paul Quinn College, the small, private, liberal arts HBCU near Dallas, reinforced the message of his colleagues, saying the question of “relevance is irrelevant.”

“We talk about being one of America’s great, small colleges,” he told the audience, saying he believes in “controlling the narrative,” thus not falling into discussions about the relevance of HBCUs.

“If you talk about relevance, you are debating the wrong question,” said Sorrell, a former securities investment attorney.

Paul Quinn was a few months short of financial collapse when he accepted the university president’s job and began a major overhaul, Sorrell said. Since then, the institution has reinvented itself on a number of fronts, including initiating learning efforts that more closely align the college with the needs of its greater community.

“We need to raise the bar, change the narrative,” Sorrell said, noting HBCUs can clear the hurdles ahead if they recast the external debate and strengthen their internal game.