Grambling Players Have No Regrets about Boycott - Higher Education

Grambling Players Have No Regrets about Boycott 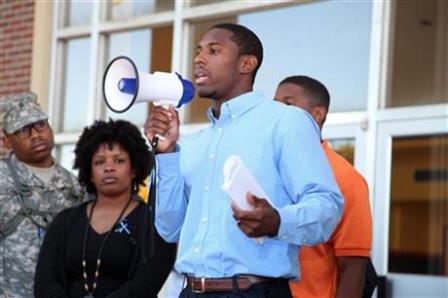 GRAMBLING La.—Naquan Smith and his Grambling football teammates have no regrets about a nearly weeklong boycott that forced the university to forfeit its game against Jackson State on Saturday.

Grambling players stood behind Smith Monday during a press conference outside of the Eddie Robinson Museum on campus. Smith said the entire team was present and that the vote to return to the field was “100 percent.”

“The football team took a stance on what we thought was right,” Smith said. “We did not quit on our university. There are many problems that exist and if no one says anything, nothing will become of our institution. We hope coach Eddie Robinson and his legendary players appreciate we took a stand and thought we were right.”

Smith said players decided end the boycott after reaching out to several Grambling greats, including former coach Doug Williams, who advised them to, “Go out there and play football.”

Smith said Bernhard told players he has their “best intentions at heart and that he would ensure we had updated facilities, but we had to agree to being back practicing Monday … and finish the remainder of our season.”

Smith said although the team will play, “We have not forgotten the situation and how we’ve gotten here.”

Players refused to travel to Saturday’s game at Jackson State, a forfeit, because of issues with university leaders.

The Southwest Athletic Conference said Sunday that Grambling had not been fined yet. SWAC Commissioner Duer Sharp told The Associated Press on Friday that Grambling would be subject to a fine for forfeiting according to the league’s bylaws.

Grambling will resume practice on Monday evening at the university practice facility. The Tigers host Texas Southern on Saturday.

“Everyone on the team wanted to play, but to get what we feel is right, we had to take a stand and make sure our voice was heard,” Smith said.

Smith said he had no comment when asked if there had been any pushback from university officials because of the boycott. No athletic administration officials were present at the players’ press conference.

It’s been a tough season for Grambling (0-8), which is on its third coach this season and has lost 18 straight football games to NCAA opponents. Williams was fired after just two games this season and replaced by George Ragsdale, who was reassigned within the athletic department on Thursday and replaced by Dennis “Dirt” Winston.

The players have been not participated in practices or games since Tuesday, when they walked out of contentious meeting with school administration.

Emmett Gill, the national director for the Student Athlete Human Rights Project, said he was on campus to help ensure that players do not face retaliation from school administration for their protest.

Grambling’s administration has confirmed one of the players’ concerns was about travel. The team recently took buses to games in Kansas City and Indianapolis.

University spokesman Will Sutton said Grambling has endured a 57 percent cut in state funding over several years that has affected the entire campus.

The athletic department was asked to cut $335,000 this year from its overall department budget of $6.8 million. Sutton said football was cut by $75,000 to about $2 million.

ESPN reported Saturday that it had obtained a letter detailing player complaints, which included mold in the locker room and improperly cleaned uniforms contributing to an increased likelihood of staph infections.

Sutton said that local health department inspectors, acting on an anonymous tip, recently visited Grambling athletic facilities and recommended changes to improve conditions, but did not deem those facilities a health hazard.