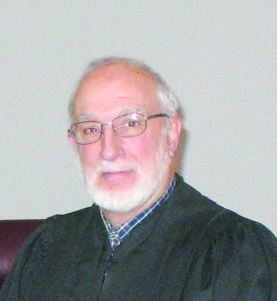 Judge John B. Leete heard arguments in the lawsuit that challenges the NCAA penalties imposed on Penn State as a result of the Jerry Sandusky child molestation scandal.

BELLEFONTE, Pa. ― A Pennsylvania judge said Tuesday he would decide later whether to allow a lawsuit filed against the NCAA by the family of longtime Penn State football coach Joe Paterno and others to go forward.

After hearing more than three hours of arguments, Judge John B. Leete said he planned to issue a written opinion in the case but did not say when.

A lawyer for college sports’ governing body urged him to throw out the complaint.

“There are those who think that reverse is a better direction, who would like to undo the resolutions and start from the beginning,” NCAA lawyer Everett Johnson said. “But this lawsuit and this court is a poor forum for the venting of frustration, and the NCAA should not be made the scapegoat for the errors and omissions of university officials.”

Leete is considering a host of issues, including whether Penn State itself is an indispensable party to the lawsuit, which challenges the NCAA penalties imposed on Penn State as a result of the Jerry Sandusky child molestation scandal.

The case pits Paterno’s family and estate, some trustees, faculty members, former players and two former coaches against the NCAA.

A lawyer for the plaintiffs, Joseph Loveland, called the sanctions “coercion and a cram-down of the highest order.” He said his clients wanted to compare the Penn State matter with how the NCAA has handled other cases.

“The truth of the matter is they were acting completely in uncharted waters with nothing whatsoever to support them on it,” Loveland said.

The court session was held a day after Penn State announced $59.7 million in settlements with 26 young men over claims of abuse by Sandusky, who was the school’s longtime defensive coach. He was convicted last year of 45 counts of child sexual abuse and is serving a lengthy state prison sentence.

Paterno’s estate and family along with some members of Penn State’s governing board, some university faculty members, nine former Nittany Lions players and two former coaches under Paterno filed the lawsuit in May, saying the NCAA had no authority to impose sanctions based on criminal matters that were not related to the sports it oversees.

The argument Tuesday also centered on the procedures the NCAA employed in determining the penalties.

The lawsuit seeks a court order voiding the agreement between the NCAA and Penn State last year that includes a $60 million fine, a four-year ban on post-season play and the elimination of 112 wins during the final years of the Paterno era. It also imposed a temporary reduction in scholarships, a penalty the NCAA softened last month.

Paterno died in January 2012 about two months after Sandusky’s arrest of complications from lung cancer. The university took down a statue in his honor outside Beaver Stadium, although the school library and other facilities still bear the name of the coach who spent six decades at Penn State.

Sandusky maintains his innocence but a mid-level state appeals court recently turned down his request for a new trial.

On Monday, Penn State said it has final settlements with 23 claimants, and three more agreements in principle. It said there are six other claims, and the school believes some of those are meritless.

The abuse scandal rocked Penn State, leading the board of trustees to fire Paterno and resulting in the unprecedented sanctions against the famous football program.