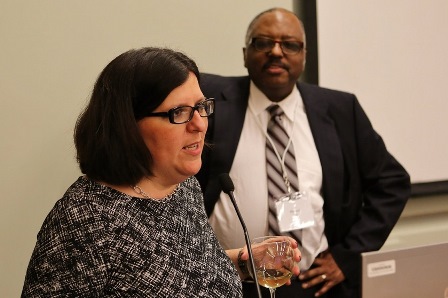 Dr. Marybeth Gasman and Dr. Michael Nettles of the Educational Testing Service lead a discussion at a national meeting in Princeton, N.J. (Photo by Darryl Moran/ Courtesy of Marybeth Gasman)

While the Center for Minority-Serving Institutions does not open officially in a physical location until January 2014, the new University of Pennsylvania-based research entity has put its brand  behind a series of research reports aimed at bringing national attention to minority-serving colleges and universities in the U.S. Reports produced from the national “Models of Success” study highlight institutional culture, best practices, and college success programs at 12 minority-serving institutions.

“One of the things we try to do is point out the common strengths and common challenges” of the 12 institutions that participated in the Models of Success project, says Dr. Marybeth Gasman, a professor of higher education in the University of Pennsylvania Graduate School of Education and director of the Center for Minority-Serving Institutions.

With the aim of documenting how minority-serving institutions (MSIs) successfully educate their students as well as promoting strategies MSIs can use to enhance themselves, the reports present the findings from research conducted at three Historically Black Colleges and Universities (HBCUs), three Tribal Colleges and Universities, three Hispanic Serving Institutions (HSIs), and three Asian American and Native American Pacific Islander Serving Institutions (AANAPISIs).

The $2 million, three-year study was sponsored by the Lumina Foundation, The Kresge Foundation and USA Funds.

Gasman and Dr. Clifton Conrad, a professor of higher education at the University of Wisconsin-Madison, led a research team to produce four reports. Gasman said the release of the reports has coincided with the launch of the Center of Minority-Serving Institutions (CMSI). Earlier this month, the University of Pennsylvania’s Graduate School of Education and the CMSI convened a national meeting at the Educational Testing Service headquarters in Princeton, N.J., to present the Models of Success research to students, educators, college administrators and MSI funders.

“It’s a critical time for MSIs to work together and share their message nationally,” Conrad said, noting that he and Gasman will be publishing a book in 2014 that will encapsulate the Models of Success study findings.

The lead report, “Minority Serving Institutions: Educating All Students,” provides an overview of the role MSIs fulfill in American higher education and in society. It urges that MSIs, which enroll more than 20 percent of all college students in the U.S., “be regarded as examples of how to increase college access and student success for students of color.” The focus of “Educating All Students” is “to let people know [to] take a look at how the country is changing,” Gasman explained.

Gasman explains that the fourth report, “Capacity Building Projects,” is based on how the 12 MSIs used $50,000 grants, which came from the Models of Study funding, and were designated to “support innovation in learning, retention, and degree attainment.” The report details how each school created or enhanced college success programs.

“Part of what we intend to do as the Center for Minority-Serving Institutions goes forward is to share our grant funding with MSIs to allow them to create new programs and initiatives,” Gasman said.

‘Anchors In the Community’