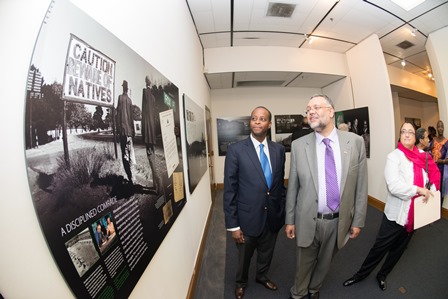 WASHINGTON — In the days since the passing of Nelson Mandela, a steady stream of people — some from as far as Germany and France — have journeyed to Howard University’s campus to pay homage to the freedom fighter by touring a photo exhibit of his life.

“Nelson Mandela: Character, Comrade, Leader, Prisoner, Negotiator, Statesmen” has been at Howard’s Moorland-Spingarn Research Center since Oct. 31, on loan from the Apartheid Museum in Johannesburg, South Africa. The 37-panel exhibit chronicles Mandela’s incredible rise from village life to his election as the country’s first Black president.

“The entire exhibit tells a brilliant story of Nelson Mandela’s incredible evolution,” says Olivia Bartley, 43, of Paris, who recently toured the exhibit with several friends. “You get the sense that he was not one-dimensional at all.”

Dr. Howard Dodson, director of Moorland-Spingarn Research Center and the Howard Libraries, says that it makes sense that the exhibit — scheduled to remain on campus until April 27 — would make its debut at Howard before traveling on a multi-city tour across the United States.

“Howard University was very centrally involved in the anti-apartheid movement,” says Dodson, who was chiefly responsible for getting the exhibit to Howard. “The alliance and connection between faculty and students at Howard and the struggling people of South Africa was one of some long standing.”

In 1994, during the presidency of Dr. Joyce Ladner, Howard presented Mandela with an honorary degree.

Since the exhibit’s opening, film screenings and panel discussions have been held, including an opening reception that featured South African Ambassador Ebrahim Rasool.

One of the most telling aspects of the exhibit is a photograph of Mandela featuring a caption from a 1952 speech where he predicted his own dramatic rise to power. “One day I will be the first Black president of South Africa,” he said at the time.

But the pathway to his presidency was laborious and slow.

“Mr. Mandela is such a revered figure that almost anything presented about him will generate a positive, emotional response,” says Dodson of the iconic figure who died last week at the age of 95 after suffering from bouts of illness for years. “There are many dimensions to his life in the exhibit that most people are not fully apprised of.”

Dodson, who was director of Harlem’s Schomburg Center for Research in Black Culture for 27 years, remembers Mandela’s three-day visit to New York City in 1990, just four months after he was released from prison.

“The most important thing is to give people an opportunity to appreciate in a comprehensive way the extraordinary life and legacy of Nelson Mandela,” Dodson says of the exhibit. “There’s a tendency for people to relate to him now as an icon. One of the things that unfortunately happens to people who are defined as icons is that they lose their humanity.”

In the upcoming week, dozens of memorial services will be held for Mandela in cities across the country, including one on Wednesday, Dec. 11 at Riverside Church in New York City. Meanwhile, flags will fly at half-mast at the United Nations this week to honor Mandela.

“We have a great deal to mourn; but, again, we also celebrate a life,” says Kingsley Mamabolo, South Africa’s ambassador to the United Nations. “We believe that we can honor the dignity and pride of Mandela by working together in making sure that we live for the ideals that he stood for.”

The exhibit, “Nelson Mandela: Character, Comrade, Leader, Prisoner, Negotiator, Statesman” is free and open to the public through April 27. Hours are Monday through Thursday, 9 a.m. to 9 p.m.; Friday and Saturday, 9 a.m. to 5 p.m.; and Sunday 1 p.m. to 5 p.m. For more information about the exhibit, visit http://library.howard.edu/msrc_mandela_exhibit.