Diana Ramírez-Jasso Designing Her Own Course of Action - Higher Education

Diana Ramírez-Jasso Designing Her Own Course of Action 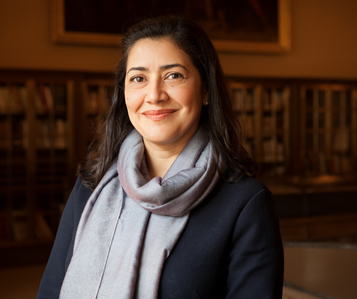 Dr. Diana Ramírez-Jasso advises new faculty members to help their students “develop the skills to understand everything they learn in a larger context of social and historical relevance.”

Boston Architectural College had a long tradition of undergraduates taking courses at other area schools to fulfill their requirements in liberal arts. Then about five years ago, accreditors insisted the professional school develop its own curriculum in those disciplines.

Creating a new liberal studies curriculum proved quite difficult. The addition of architectural accrediting requirements that undergraduate liberal studies courses not contain any design-related content made the task of offering courses that interested the college’s population even more challenging to every faculty member who occupied the position.

A third search in three years did the trick. Dr. Diana Ramírez-Jasso arrived from Harvard University in 2010 and put together an innovative program tailored to the diverse architecture and design students at Boston Architectural College, which has open enrollment.

Ramírez-Jasso, born in Mexico City and raised in Guadalajara, was a doctoral student at Harvard with a deep interest in history. She recognized the architectural college, with social justice at the core of its mission, needed to do more than just duplicate the liberal studies courses of other universities.

“There is a bigger, better reason than just accreditation. We need the liberal studies to provide that larger context in which design operates,” Ramírez-Jasso says. “To entrust this kind of liberal learning to other institutions whose missions may or may not align with ours would be a tremendous risk.”

So Ramírez-Jasso went to work aligning the new curriculum. “We’re now making sure those things that we provide our students are in line with this broader mission to create designers who are socially-engaged,” she says. “They need to understand how their profession is impacted and impacts culture and society.”

A guiding principle, Ramírez-Jasso says, was “a combination of increased rigor and accessibility” in the new courses.

The curriculum
in liberal studies includes required and elective courses in the social sciences and humanities, mathematics and the natural sciences, and the visual and performing arts.

“She developed courses we hadn’t had before that are really interesting,” says Halevy.

But Halevy says Ramírez-Jasso has perhaps made her biggest impact by reshaping first-year writing courses. “I think her focus on the early courses is the thing that has been more revolutionary than anything, here and anywhere else,” Halevy says.

Because of the open enrollment policy, a diverse group of students enter at different ages with varied degrees of preparation for college coursework. Some students are intimidated by writing or have learning disabilities or poor study habits that present a challenge to developing the skill.

Ramírez-Jasso scrapped traditional writing courses and created new ones with additional contact time for those who want or need it. Technically, these are not writing courses at all, but courses that emphasize critical reading and effective research strategies as building blocks for persuasive argumentation. They focus on building students’ voice and confidence in expressing their ideas.

“We don’t assume that students come in with skills that already reflect the need to engage with ideas at the college level,” notes Ramírez-Jasso. “Instead, we actually teach how to do that.”

Learning to read others’ writing critically, Ramírez-Jasso says, helps the students improve their own because they think more deeply about their words and meaning.

“She has designed the course around empowering students to find their own voices,” Halevy says. “We’ve had much success in students becoming better writers and critical thinkers rapidly, no matter their background. We offer them the capacity to gain their own voices, which builds their confidence.”

Halevy says Ramírez-Jasso was able to create the liberal studies curriculum in part because of her confidence in her own capacity and ideas. Her tolerance, idealism, energy and “intellectual prowess” also played a role. “She commanded respect quite quickly,” says Halevy.