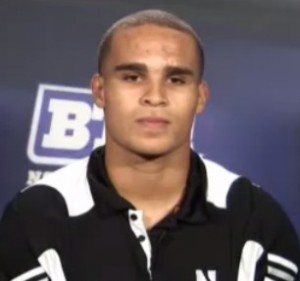 Northwestern quarterback Kain Colter is leading the effort to unionize football players at the university.

CHICAGO ― Northwestern University officials on Thursday countered a quarterback’s allegations that the program places athletics over academics, urging a federal agency to deny a bid by the school’s football players to form the first college athletes’ union in U.S. history.

Witnesses for the school challenged union lawyers’ assertions Northwestern football is highly profitable. And they denied other accusations by the union’s star witness, outgoing senior quarterback Kain Colter, that classroom performance is given far less weight than on-the-field success.

The testimony came in a third day of hearings on whether the National Labor Relations Board should approve the Wildcats’ players request to unionize. The first-of-its kind effort is being closely watched by other schools and college athletes nationwide.

“The basis of everything we do is … academics,” she said. “It is absolutely in our fabric.”

To buttress that point, she said the latest cumulative GPA of the football team was just over 3.0 on a scale of 1 to 4 — a B average. She also said 97 percent of football players get their degrees, which Northwestern says is the highest rate in country.

During testimony earlier this week, Colter charged the school’s approach seems to be, “You fulfill the football requirement and, if you can, you fit in academics.”

The athletic official insisted academics trumps football at the school. Blais cited an instance where most of players traveled to an away game against Iowa, but another bus was held back and left later, so several players could finish tests.

She also challenged testimony from Colter that he was unable to enter pre-med because of intense time demands of football. She said there were multiple examples of Northwestern football players who did go on to medical or law school.

In testimony on football profits, the chief financial officer for the athletic department, Steven Green, said Northwestern football isn’t the profit-making venture the union made it out to be and that athletics overall even loses money.

Testimony Wednesday for the proposed union, the College Athletes Players Association, of CAPA, indicated Northwestern football made a $76 million profit over ten years ending in 2012, on $235 million in revenues and $159 million in costs.

The pro-union side hoped to illustrate the school’s football program is essentially a commercial enterprise, much like the NFL, and so the relationship to the players should be one of employer to employees.

But Green said the purported profit figures were misleading and didn’t include all expenses incurred by football. For instance, he said, up to $500,000 goes into structural repairs of Northwestern’s stadium each year but aren’t included in the costs cited by the union.

And he said if you considered all sports programs together, including far less popular sports, athletics loses money — a total of more than $12 million in 2012. Other, non-sport revenue has to be diverted to athletics as a subsidy, he said.

NLRB hearing officer Joyce Hofstra several times stopped Green’s testimony, asking lawyers how discussions of profit or loss addressed the main question the board must answer: Are football players employees? But she let him continue because, she said, the union’s attorneys waded into the same issues in their presentation.

If the board deems Northwestern players are employees by U.S. law, they would be allowed to organize CAPA as a union.

Why College Football Should Be Banned