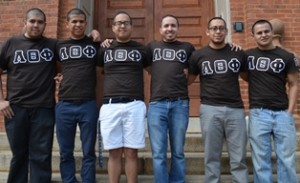 It may have been just a matter of time. As historically Black colleges and universities promote diversity by recruiting students from various racial and cultural backgrounds, at some point these students would want to establish their own social organizations.

At Johnson C. Smith University, an HBCU in Charlotte, N.C., six Latino students decided the time was right to organize a fraternity. So they began a chapter of Lambda Theta Phi Latin Fraternity, which was recently accepted by the university, making JCSU the first HBCU to admit a nationally recognized Latino fraternity to its campus.

The young men, who are all pursuing degrees in science, engineering and math disciplines, say their common academic pursuits led them to bond and eventually to discuss the idea of creating a fraternity.

But they had other reasons as well. “One day on a bus ride we were saying how we wanted to make an impact on the community,” recalls Luis Dominguez, who is going into his senior year as a biology-chemistry major. “We also wanted to celebrate our heritage and promote Latino culture at the university.”

Cathy Jones, Johnson C. Smith’s dean of student success, says the university welcomed the new fraternity into its family of student organizations. “It really aligns with the university’s vision and mission to create cultural diversity at JCSU,” Jones says. The students are all originally from Latin countries. “As our international population continues to grow, we are integrating our international students into the mainstream, and this is one way to do that,” Jones adds.

The founding members are Dominguez, Omar Cossio, Yerrison Cardenas, Francisco Cerrillo, Sergio Montesdeoca and Juan Carlos Hernandez Campillo. Lambda Theta Phi is a national organization, recognized by the North-American Inter-Fraternity Conference and the National Association of Latino Fraternal Organizations. It has undergraduate chapters on 126 other campuses, including four in North Carolina.

None of the other campuses is an HBCU, however, so its acceptance by Johnson C. Smith signals the changes that are occurring as many HBCUs expand their recruiting to diverse populations, including international students. JCSU’s fall 2013 enrollment was 1,331 students with 6 percent classified as international.

Cerillo says the six Lambda brothers were in the “first wave” of the school’s outreach to students in STEM disciplines. The students hope to help more Latino high school students view higher education as an option, and they hope to increase Latino enrollment at JSCU and HBCUs in general.

The students are all acutely focused on academics—Cossio, for example, was recently selected to make a presentation to the Clinton Global Initiative on a farming sustainability project developed by a JCSU team. It features an aquaponic garden that combines growing crops and cultivating fish in a closed loop environment. The team will be traveling to Haiti this summer to introduce the project there.

The fraternal group is also taking a bold stance on the issue of immigration reform.

“We all came to the university undocumented. That’s pretty much what brought us together,” says Cardenas, a junior information systems engineering major. “We do a lot of community service and go to high schools to let students know that being undocumented shouldn’t hinder them in education or in life.”

The university also is open about the students’ immigration status. “The students began the process of establishing the chapter three years ago when the university began recruiting undocumented Latino students,” an April 28 JCSU news release stated. “We’re a private institution, so that is not an issue for us,” Jennifer Gaskins, JCSU assistant director of university communications, told Diverse.

The Lambda members stress that the organization has an open-door policy. Despite being billed as a “Latin” organization, anyone is welcome to join if they meet the university’s 2.5 GPA requirement and other qualifications for participation in interest groups.

Arizona Law Has Undocumented Immigrants Dropping Out of College