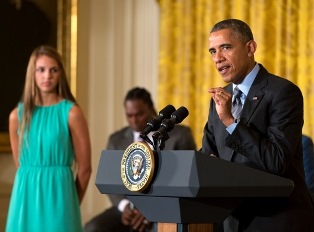 President Obama hosts the Healthy Kids and Safe Sports Concussion Summit at which it was annouced that the NCAA and the Department of Defense are collaborating on comprehensive concussion study. (Photo courtesy of White House)

The newly-announced collaboration between the U.S. Department of Defense and the National Collegiate Athletic Association (NCAA) on a landmark $30 million study of concussion and head impact exposure is expected to enroll an estimated 37,000 male and female NCAA student-athletes over a three-year study period.

Conducting the comprehensive investigation will be a research consortium led by teams from the Indiana University School of Medicine, the University of Michigan, and the Medical College of Wisconsin, according to officials. The research entity is titled the Concussion Assessment, Research and Education (CARE) Consortium, and its work will involve athletes from as many as 30 universities.

The three-year investigation is expected to produce critical insight of the risks, treatment and management of concussions. An education component of the initiative, managed by the NCAA, will produce a state-of-the-art multimedia education program for athletes, coaches and administrators with the aim of cultivating responsible behavior and attitudes about concussions.

“So [the U.S. Department of Defense and the NCAA] have decided to pull their resources together to do some of the most definitive studies on concussion that have been done to date,” said Dr. Thomas McAllister, chairman of the Department of Psychiatry at the Indiana University School of Medicine.

McAllister, who will direct CARE’s administrative and operations center at the IU School of Medicine, was one of the attendees at the White House Healthy Kids and Safe Sports Concussion Summit last week during which the NCAA-DoD initiative was announced. In addition, the White House announced new initiatives by the National Football League and the National Institute of Standards and Technology aimed at improving head safety practices and technology for youth sports.

“It says a lot that people are willing to make the commitment to try and understand really what the risks are; how we can inform ourselves about that and how we can make better choices and hopefully develop the kind of information that would inform public policy around head injury,” he said.

NCAA president Mark Emmert said last week in a statement that “NCAA schools have placed a priority on improved concussion management” but noted that there are “many unanswered questions” in brain injury science.

“We believe in the incredible potential of this research. Student-athletes will be first to benefit from this effort, but it also will help to more accurately diagnose, treat and prevent concussions among service men and women, youth sports participants and the broader public,” Emmert said.

At the University of Michigan (UM), a research team led by Dr. Steve Broglio, the UM associate professor of kinesiology, will broaden an existing NCAA long-term study of concussion and repetitive head impacts among college athletes. The project has been conducted as a longitudinal study, which means the data have been gathered on the same individuals over some time.

A Medical College of Wisconsin team led by Dr. Mike McCrea, a professor of neurosurgery and neurology, will pursue a number of research projects including work on advanced neuroimaging, biological markers and clinical studies. The Wisconsin researchers will also focus on developing impact sensor technologies. Their work will incorporate long-term data collected from college athletes.

The Wisconsin-based research “will combine and marry the latest technologies that allow us to study mechanisms and the biomechanics of injury in real time using head impact sensors our athletes are equipped with,” McCrea said in a video news release.

In the Line of Fire