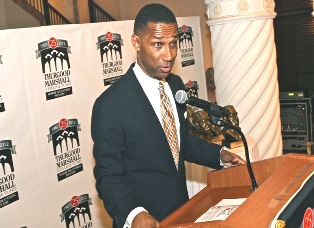 One of the largest labor unions in the country has decided to partner with the Thurgood Marshall College Fund to provide scholarships and other educational opportunities to students, after severing its ties with the United Negro College Fund (UNCF) over its decision to accept money from the controversial Koch brothers.

In a letter sent to UNCF president Michael Lomax back in July, the American Federation of State County Municipal Employees union (AFSCME) president Lee Saunders announced that it had decided to pull out of the Union Scholars program that had been jointly run by the two groups, telling Lomax that his decision to accept $25 million from Republican operatives David and Charles Koch and a subsequent appearance at one of their events was a “profound betrayal of the civil rights movement.”

At the time, Saunders had said that AFSCME would work directly with Historically Black Colleges and Universities, but have since turned to the Thurgood Marshall College Fund (TMCF)—which supports and represents nearly 300,000 students attending its 47-member schools that include public Historically Black Colleges and Universities, medical and law schools—as its new partner.

“Our commitment to students of color at historically Black and other colleges and universities is unwavering,” said Saunders. “AFSCME’s partnership with the Thurgood Marshall College Fund enables us to continue a tradition of developing young leaders who are dedicated and passionate about making a difference in our society.”

“They absolutely could have gone to a number of places if their whole goal was just Black diversity,” said Taylor in an interview with Diverse. “They did not need to be in the HBCU space.”

TMCF’s partnership with the union—which has nearly 1.6 million members— cements the group’s position as the go-to advocacy organization for HBCU students across the nation.

“We didn’t just switch spaces, we grew the program,” said Taylor, who added that he did not want to see the AFSCME program disappear after the debacle with the UNCF over the Koch program donation. “This is not a competitive thing. And its not intended to be a knock on the UNCF. But it would have sent the wrong message about the significance of HBCUs and their students if AFSCME would have abandoned this program.”

In addition to the national union, several local unions across the nation—including New Jersey—have already reached out to TMCF to find out how they can also create opportunities for HBCU students.

“At the end of the day, if we keep the focus on students we will do the right thing,” said Taylor. “We always have to be asking, ‘What is in the best interest of HBCU?’”

AFSCME launched its Union Scholars Program in 2003 and have provided opportunities for students from over 40 institutions of higher learning. The AFSCME Union Scholars Program provides students with an internship and the opportunity to earn money for college. The students work on the frontlines of organizing campaigns, helping workers gain a voice on the job and better their lives for themselves and their families.

In the wake of the Koch brother’s donation to the UNCF, AFSCME was one of the first organizations to publicly criticize the organization for accepting the funds.

“The Koch brothers and the organizations they fund have devoted themselves for more than a decade to attacking the voting rights of African Americans,” Saunders wrote in his letter to Lomax. “They support voter identification laws. They seek to restrict early voting and voter registration. They support laws that threaten organizations that register voters in the African American community. They funded organizations that advocated for the Supreme Court’s rolling back of the Voting Rights Act and the removal of the special protections that act provided to people of color in those parts of the country where so many of our forebears were killed for seeking to exercise their right to vote. The Koch brothers are the single most prominent funders of efforts to prevent African Americans from voting.”

Dr. Marybeth Gasman, a professor of higher education at the University of Pennsylvania’s Graduate School of Education and the director of the university’s Center for Minority Serving Institutions said that she’s pleased that the AFSCME is partnering with TMCF.

“I am happy to see that AFSCME has found a positive outlet for its scholars program,” says Gasman, an expert on HBCUs.  “It is unfortunate that this very significant union had to part ways with the UNCF after its recent acceptance of a donation from the Koch brothers. However, AFSCME is standing on principle and with its members (a high percentage of which are people of color) in pushing back at the policies and practices of the Koch brothers.”

Gasman said that other organizations have to be more prudent when it comes to accepting philanthropic donations.

“Blatantly disenfranchising African Americans and others with one hand while throwing money at these same people with the other hand, crosses the line for me,” she said.

ASSIGNMENTS GETTING TOUGHER FOR TRUSTEES

Student-Athlete Graduation Rates Up; Blacks Still Have Work to Do