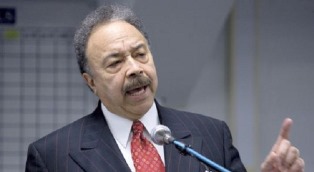 Dr. William R. Harvey, president of Hampton University and chairman of the White House Advisory Board on Historically Black Colleges and Universities, cut straight to the chase in his opening remarks at the National HBCU Week Conference.

“Federal support for HBCUs is showing an alarming downward trend, and our friends in Washington need to know that we are watching and counting,” Harvey said Monday.

Funding is down across the board for African-American students and HBCUs, Harvey said. He deplored the Parent PLUS loan situation as a “debacle” and noted that HBCUs have been left out of an important national alliance designed to serve minority and low-income students.

Harvey’s statement helped open up a volley of critiques of the Department of Education and fears about the future. Though institutions are still reeling from the consequences of the revised criteria for obtaining Parent PLUS loans, they are already looking ahead with concern to the impending rollout of the proposed College Ratings System.

Ted Mitchell, Under Secretary of the U.S. Department of Education, said, “We made mistakes in the Parent Plus loan, straight up, made mistakes. It shouldn’t have happened the way it did.”

The Education Department has acknowledged flaws in the Parent Plus loan decision and is working to reconsider it. “Just a few months ago, right when I was coming into the Department, the group came to some broad consensus about how to refashion the Plus Program,” Mitchell said, adding that details would be revealed in October.

“I’m very grateful for the panel,” said the Rev. Leah Gaskin Fitchue, president of Payne Theological Seminary, following the discussion. “We’re all on the same team. We all want the best outcome for historically Black schools.”

Fitchue said that having more voices at the table to represent HBCUs during policy discussions might help achieve more positive outcomes going forward.

“[The Parent Plus loan] has been an issue that has affected a lot of minority serving institutions. I hope that they can go back to the norm,” Jasmine Hicks, Higher Education Campaign Director of Young Invincibles, told Diverse after the panel.

The HBCU community is now waiting for the anticipated rollout this fall of the ratings system. Some fear that the college ratings may, like the Parent Plus loans, have unintended negative consequences for HBCUs.

“All of our campuses were hit hard by the stringent regulations placed on the Parent PLUS loan,” Dr. David Wilson, president of Morgan State University, told Diverse. “Going forward, there are still a lot of unknowns. The devil is in the unknowns, as a result of not knowing what the administration is thinking about in terms of the ratings system.”

Citing the wide range of higher education institutions across the country, Wilson questioned the viability of a comprehensive ratings system. “My major concern is that I don’t think we can come up with a rating system in this country that (speaks) to the variety of missions of higher education systems,” he said.

Johnny Taylor, president of the Thurgood Marshall College Fund, told Diverse last week that he is not opposed to the concept of a ratings system, as long as it accounts for the nuances and differences between institutions. But the fact that he and TMF member institutions have had little input into what shape the ratings system will take may put them in a reactionary position by default when the plan is announced.

“We want to support the Department. I’ll support this conceptually, but the devil is in the details,” Taylor said. “I would like for our organizations to be a part of this process, as opposed to us having to react to whatever [the Department] rolls out.”

Taylor said that, when the plan was first announced, then Under Secretary of the U.S. Department of Education, Martha J. Kanter, assured him the Department would take his views—and those of TMCF institutions—into consideration. He has yet to hear from the Department.

“No one at the Thurgood Marshall College Fund has been contacted by the Department of Education to engage in a discussion in what these ratings will look like,” Taylor said. “If the system is not done properly, one that understands and respects all of the nuances that exist between institutions, it will harm HBCUs, period.”

At Tuesday morning’s panel, Jamienne Studley, Deputy Under Secretary of the U.S. Department of Education, attempted to clarify the Department’s position on the ratings system.

“We are still building it, so I can’t describe it,” Studley said. “But that’s why we’re going to have an extensive period for you to see it. We’re trying to use the smartest ideas and the most heartfelt warnings about how to build it.”

To the Academy With Love, From a Hip-Hop Fan