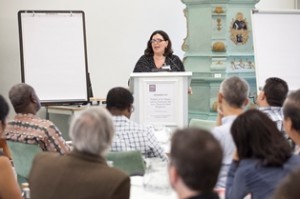 Dr. Marybeth Gasman, professor of higher education at the University of Pennsylvania and director of the Penn Center for Minority Serving Institutions, addresses more than 50 educators from across the globe at the “Students at the Margins and the Institutions that Serve Them: A Global Perspective” seminar held this week in Salzburg, Austria.

SALBURG, Austria — Determined to build a strong international network among themselves, more than 50 educators from across the globe converged on this small European city this week to strategize over how best to support students operating at the margins.

The five-day international seminar—the first of its kind—is appropriately titled “Students at the Margins and the Institutions that Service Them: A Global Perspective” and is the brainchild of Dr. Marybeth Gasman, a professor of higher education at the Graduate School of Education at the University of Pennsylvania and director of the Penn Center for Minority Serving Institutions.

“I thought, ‘Wow, wouldn’t it be amazing to get people to start talking about minority serving institutions or institutions that serve disenfranchised or underrepresented students in other countries,’” said Gasman, who had been planning the Salzburg Global Seminar for the past two years with support from the Educational Testing Center and the Kresge Foundation. “I also think it lifts the role of minority serving institutions in the United States when you think about them in a global way and oftentimes people think about them in a negative way and I would rather have them think, ‘Wow, maybe they’re ahead of the game.’”

While the racial term “minority serving institutions” (MSIs) is a federal designation used in the United States to identify colleges and universities that service a particular demographic, Gasman acknowledged that “the term doesn’t really carry meaning” in other places around the world.

Still, participants from countries as far away as China and South Africa told stories of a group of students who too often are disenfranchised or marginalized in their respective countries often because of their ethnic, racial or economic status.

“In the United States, the minority serving institutions are the ones serving a majority of the disenfranchised students,” said Gasman. “But in all of these other countries, I don’t think they think of their students as a minority.”

The marginalization of pockets of students throughout the world still remains a daunting challenge.

During sessions and break-out groups, participants talked about the obstacles that Afghan refugees face and described the discrimination that Roma people in Central Europe are subjected to on a daily basis. They drew striking parallels between the disenfranchisement encountered by undocumented immigrants in the United States.

“While we’ve expanded access to college, we have not done much to change success,” said Dr. Venitha Pillay, an associate professor in the Department of Education at the University of Pretoria in South Africa. She pointed to the dismal graduation rates of Black South Africans—only 12 percent—as evidence that more work needs to be done.

In the post-apartheid era, colleges and universities in South Africa have struggled over how best to serve the country’s population of Black students, even though they are part of the country’s ethnic majority.

And yet, Pillay is an optimist. She has not given up hope that things eventually will improve.

“I think of the margins as a place full of possibilities,” she added.

Gasman said that the seminar, which is being held at the historic Schloss Leopoldskron Palace located in Salzburg—the birthplace of famed composer Mozart—was designed to foster collaboration with institutions across the globe. To support the initiative, ETS and the Penn Center on Minority Serving Institutions is offering four $2,500 “Margin Busters” awards—seed money —to help these scholars find solutions to address the marginalization of students from various demographics.

At the opening session of the seminar, Jennifer Cordova-James, a student at Northwest Indian College, a tribal college in Bellingham, Wa., said that colleges and universities can help disenfranchised students, like herself, affirm their racial identity.

“Help students know who they are to help them know where they’re going,” said Cordova-James, who is pursuing a bachelor’s degree in tribal governance and business management.

Dr. Mochamad Indrawan, an ecology professor at the University of Indonesia, said he’s been impressed with the range of ideas from the seminar.

“This opportunity is very much favorable,” he said. “Bringing diverse populations around the world is good so that we can be inspired on how we can deal with the marginalization and disparity issues based on where we are from.”

Today, the seminar will continue with a discussion about the use of affirmative action.

Gasman said that Americans, in particular, could benefit from learning more about how other countries deal with racial preferences when it comes to the admissions process.

Jamal Watson can be reached at jwatson1@diverseeducation.com. You can follow him on twitter @jamalericwatson. Watson is in Salzburg, Austria, and will be reporting from the seminar all week.

Beyond Borders—STEM Education as a Global Priority