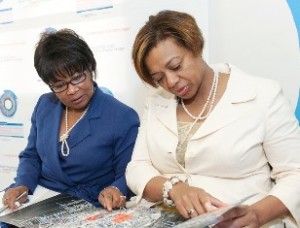 By December 11, the four institutions will have to submit formal detailed proposals that include site development plans, community partnerships, project management and organization plans, marketing strategy, and financial commitments. Earlier this year, the foundation sought Requests for Qualifications from the 13 applicant institutions, which were evaluated on factors such as accessibility, community involvement, and economic development.

“We were amazed by the quality of responses to our Request for Qualifications and we are grateful to every institution that expressed interest in carrying President Obama’s legacy forward,” said Martin Nesbitt, the chair of The Barack Obama Foundation board, in a statement.

“These four potential partners have come the farthest in meeting our criteria and have each demonstrated a strong vision for the future Obama Presidential Library. We look forward to working with each institution to further refine their proposals over the coming months, and to presenting our recommendations to the President and First Lady early next year,” he added.

Obama has ties to each location. A native of Hawaii, the 44th U.S. president completed his undergraduate education at Columbia University. Following his Harvard University law school years, Obama returned to Chicago where he had previously resided while working as a community organizer. After moving back to the Windy City where he would launch his political career, Obama taught at the University of Chicago law school and lived nearby in the Hyde Park community.

“We will move forward with a bid that honors the rich history and traditions of the South Side and the promising future of our city,” he noted.

Chicago’s other library site finalist, the University of Illinois at Chicago (UIC), has promoted its status as a public institution and has proposed city West Side locations whose proximity to public transportation would make the library accessible to a wide audience. “We have some great sites that are easily accessible from downtown and are not being contested in any way,” UIC university librarian Mary Case told Diverse.

“We have a campus that has great affinity with the values of President Obama and Mrs. Obama in terms of what our core values and missions are,” she said.

UIC president Paula Allen-Meares has stated that Obama and UIC share the goal that public institutions play a major role in creating and facilitating “a more open and inclusive” society. “As a land-grant institution, UIC makes it possible for aspiring students, regardless of race, gender or socioeconomic status, to obtain a high-quality education at an affordable cost,” she said in a statement.

The Barack Obama Foundation board is expected to share its library site recommendations with the president and First Lady, who will make the final decision in early 2015. The Obama Presidential Library will be the 14th in the federal presidential library system. The George W. Bush presidential center in Dallas opened in May 2013.

Hitting the Books on Instructional Technology

In the Name of Diversity

Survey: Most Believe U.S. Will Have Woman President in 20 Years or Less

HBCUs Get Savvy About Fund Raising