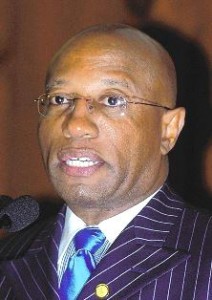 Isaac Sanders, the defendant, was fired from East Stroudsburg University six years ago following an investigation into allegations of sexual improprieties.

They came from broken homes to a state university in Pennsylvania’s Pocono Mountains and met the father figure they never had: a school vice president who offered them scholarships or campus jobs as they adjusted to college life. But then came the pressure for sexual favors or, in some cases, sexual assaults, according to a federal civil-rights lawsuit heading to trial this week.

Now in their 20s and early 30s, the men are pursuing the justice they say they’ve so far been denied by law enforcement.

The defendant, Isaac Sanders, was fired from East Stroudsburg University six years ago following an investigation by the Pennsylvania State System of Higher Education, an agency that oversees 14 state-owned universities. He has consistently denied wrongdoing, saying in court papers he’s the victim of “untrue crude and vulgar allegations of sexual assault and perversion” by plaintiffs “motivated by less than honorable intentions.”

Sanders has never been charged with a crime. But an Associated Press review raises questions about the State System’s response to the scandal, the extent to which local law enforcement probed allegations that will now be heard by a civil jury instead of a criminal one, and the lack of involvement by prosecutors in the state attorney general’s office.

The plaintiffs’ attorney, Albert R. Murray Jr., a former federal prosecutor, complained as far back as 2009 about a lack of follow-through by the local district attorney, and pressed for a state investigation as recently as this summer into allegations that a Pennsylvania governor once called “criminal” in nature.

The students’ lawsuit said Sanders, who is Black, targeted emotionally fragile young Black men. One student alleged Sanders forced him into oral sex, while other plaintiffs claimed he groped their genitals, engaged in other kinds of unwanted touching, and made inappropriate sexual comments.

Sanders, who served as East Stroudsburg’s vice president of advancement ― its chief fundraiser ― declined comment to The Associated Press last week. His attorney, Harry Coleman, said Sanders is looking forward to getting the case before jurors so they can hear the facts instead of “rumor, gossip, innuendo.” He added that Sanders was never charged with a crime because “there’s nothing there.”

But the State System concluded, at the very least, that Sanders’ conduct brought the 7,000-student university into disrepute.

The agency paid more than $250,000 to an outside law firm to probe not only the sexual misconduct allegations, but also charges of financial malfeasance by Sanders. The official report of that investigation was never made public, but it resulted in Sanders’ termination.

Each of the sex and financial misappropriation accusations “provided an independent basis that could stand alone for your termination,” East Stroudsburg President Robert Dillman wrote to Sanders in an October 2008 dismissal letter now included as an exhibit in the civil case.

Noting that Sanders had denied any sexual impropriety, Dillman added: “Your response is generally not supported by the available information.” Dillman also asserted that Sanders misappropriated a donor’s bequest and improperly paid a student’s debt using donor cash.

“They didn’t ask for them, and we didn’t provide the results of the investigation,” said State System spokesman Kenn Marshall.

The State System had a responsibility to turn the report over to criminal investigators, said Richard Painter, chief ethics lawyer under President George W. Bush and now a law professor at the University of Minnesota.

“Given the magnitude of the allegations, it should have been reported to the state attorney general,” he said in email.

“More often than not they are going to take the position, ‘We handled it internally, we don’t want the cops to stomp around in here,’” said Fina, who prosecuted former Penn State assistant football coach Jerry Sandusky on child sexual abuse charges and now works in the Philadelphia district attorney’s office.

A spokesman for current Attorney General Kathleen Kane confirmed the office has no record that a criminal investigation into Sanders was ever opened.

Yet the State System wasn’t the only arm of state government that had the report in its possession. The attorney general’s civil litigation arm ― which represented East Stroudsburg and university officials named as defendants in the lawsuit and successfully petitioned to have them removed from the case ― had a copy of the report. There’s no indication they ever gave it to their counterparts on the criminal side.

Perhaps the biggest mystery of the Sanders case involves Monroe County District Attorney David Christine, who would have had primary jurisdiction to investigate and prosecute.

Christine told a newspaper in November 2008 that he had launched an investigation into Sanders, then remained silent for years even as the accusers’ lawyer questioned the seeming lack of progress.

Last week, in his first public remarks on the case in six years, Christine revealed to the AP that his office had long relinquished the probe to another law enforcement agency he declined to name.

That agency “requested permission approximately four years ago to take over and incorporate our investigation into their own ongoing investigation,” he said via text message. “We readily agreed, considering our lack of investigative resources compared to the requesting agency.”