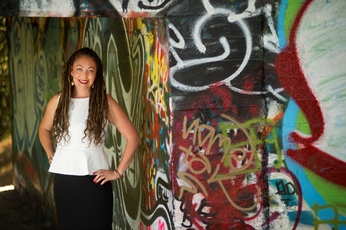 Dr. Vajra Watson praised the school district for “raising the bar for the nation [with] a model for institutionalizing efficacy and disrupting barriers to achievement.”

A public schools program aimed at reducing and eliminating the Black male achievement gap has been praised by a University of California, Davis researcher for offering “a beacon of hope.”

Now in its fifth year, the Manhood Development Program, a five-day-a-week, in-school elective course in Oakland, California, has been touted as a national model for school districts nationally.

“I am fascinated by the seeds of courage and determination that spurred a school district to make an unprecedented commitment to the education of Black males,” says Dr. Vajra Watson, director of research and policy for equity at UC Davis. Watson’s recently released report, “The Black Sonrise,” examines the Manhood Development course and mentoring initiative.

The initiative began in 2011 with 50 students at three Oakland schools and quickly expanded in enrollment and reach. This academic year, 450 students are enrolled in Manhood Development across 17 elementary, middle and high schools. There is a wait list for participation.

The Manhood Development recommended reading list contains respected titles such as Ralph Ellison’s Invisible Man, James Baldwin’s Go Tell It On The Mountain and Alex Haley’s Roots. Course instructors try to relate the content of the stories to their students’ lives.

For instance, one instructor assigned his class to read The Autobiography of Malcolm X. Rather than limit discussion to historical facts, the instructor led talks about how Malcolm Little’s early life paralleled and differed from those of the students.

By dissecting the first 15 years of Little’s youth, the boys learned that he was a foster child and that, although he aspired to become a lawyer, one of his teachers told him to settle for carpentry. Such discussions allowed the Manhood Development students to deepen their knowledge of themselves and their sociocultural surroundings.

The lessons also have motivated students to strive for better grades in their other classes.

Grade point averages are now 25 percent higher for Manhood Development students than for Black male students who haven’t taken the course, according to the Oakland school district’s African-American Male Achievement (AAMA) office. Districtwide, the Black male graduation rate has improved from 42 to 57 percent since the course was introduced.

Furthermore, the number of Black male high school seniors who qualify for admission to the University of California (UC) or California State University is 6 percent higher among the Manhood Development participants than for non-participants.

Put another way, of the 56 seniors who have taken the course, 19 of them currently qualify for admission to Cal State or UC, according to the AAMA office. Launched in 2010, the office aims to improve academic and life outcomes for Oakland’s Black male students by creating supportive systems and structures.

“We are trying to change the school system and improve adult behavior,” says Christopher Chatmon, executive director of AAMA. “It’s about helping students, in real time, who are being treated like villains and suspects when they have done nothing wrong.”

When the AAMA office was established, Black male school attendance and literacy rates in Oakland lagged far behind those of other subgroups. About 22 percent of Black male students were categorized as chronically absent in high school in 2010, meaning they missed 10 percent or more of the school year. At the time, this subgroup made up only 17 percent of the school district’s total enrollment and 30 percent of high school students, but comprised 42 percent of suspensions.

Some of the Manhood Development instructors have become advocates at and change agents for their respective schools.

At one institution, for instance, an instructor noticed that on-campus suspensions consisted of a room full of African-American boys who were sent there for an entire day. The instructor suggested changes to the administration that led to teachers sending students there for only one class period, during which the youths completed work that helped identify causes of the misbehavior. Since then, fewer students are in that suspension room, and morale at the school has improved.

“These youths constantly vacillate between feeling mistreated on the one hand and unstoppable on the other,” “The Black Sonrise” report states. “This is an important developmental bridge that Manhood Development classes tap into — academic achievement becomes part of the narrative of resistance, resilience and revolution. Manhood Development is an important escape from day-to-day micro-aggressions.”

Districtwide, suspensions have steadily decreased each year since the Manhood Development course began. In 2011, about 20 percent of Black male students were suspended at least once, a rate that plummeted almost in half by February 2013, according to the Oakland school district.

Manhood Development classes enroll about 20 to 25 students apiece. Participants are chosen by school officials. About one-third are high academic achievers. Average and below-average achievers each comprise one-third of the participants. The heterogeneous mix prevents the classes from being stigmatized as dumping grounds for the most troubled youth. The boys support each other in overcoming their respective academic and social obstacles.

Watson praised the school district for “raising the bar for the nation [with] a model for institutionalizing efficacy and disrupting barriers to achievement.”

She adds, “The children are not the problem.”