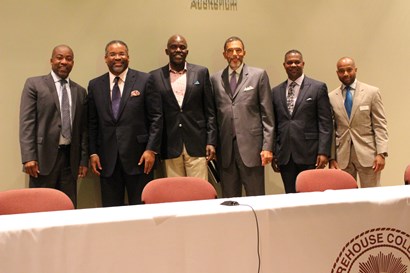 The small, but highly selective national fraternity, which was founded in Philadelphia in 1904, is using its resources and its name recognition to partner with other organizations to develop and implement a long-term research strategy focused on social action programs that target African-American males.

The fraternity’s efforts are largely in response to the “My Brother’s Keeper” initiative, which was launched by President Obama last year in an effort to train a public spotlight on the challenges that beset young men of color. And since its inception, the Obama administration has actively encouraged local political and civic leaders across the country to accept the “My Brother’s Keeper Challenge” and redouble their efforts to improve high school graduation rates and keep young men of color safe from violent crime.

“It is a top order priority right now,” said Dr. Jerlando F. L. Jackson, the Vilas Distinguished Professor of Higher Education Educational Leadership and Policy Analysis at the University of Wisconsin-Madison and the chair of the fraternity’s Commission on Young African American Males. “The Commission plans to take a leadership role in organizing with strategic partners and organizations that have committed themselves to Black males,  as we  look for a unified mission of engagement.”

Jackson said that the fraternity, which has a diverse membership, including scholars like Dr. Gregory Vincent, vice president for Diversity and Community Engagement at the University of Texas at Austin, will conduct ongoing research on such topics as the school to prison pipeline and empirically-grounded and evidence-based mentoring programs that focus on African-American males. He said that the findings—which will also highlight best practices—will be disseminated through reports, panel discussions, and articles in the Boulé Journal.

“This is an opportunity to sharpen our efforts based on empirical reality,” said Jackson, whose research focuses on African-American males both in the United States and abroad. “What was done 30 years ago may have to be retailored today.”

In the wake of the “My Brother’s Keeper” initiative, there has been a flurry of new initiatives focused specifically on young men of color. In February, Dr. Shaun Harper, a professor in the Graduate School of Education and founder of the Center for the Study of Race and Equity in Education at The University of Pennsylvania, signed on to co-direct a new three-year initiative called RISE (Research, Integration, Strategy and Evaluation).

According to Harper, the initiative is committed to better understanding the long-term strategies that lead to better outcomes for boys and men of color in four key areas: education, health, criminal justice, and economic opportunity and workforce development.

Over the years, the Boulé, whose membership has included prominent Blacks like Drs. W.E.B Du Bois and Martin Luther King Jr., has been accused of being elitist and not out front on social issues that impact the masses of African-Americans.

“I think there’s a bit of misunderstanding about how the Boulé operates,” said Jackson. “Many of our members already serve in leadership positions within other organizations. There is very little going on that we are not involved in. I may not be acting primarily as a Boulé member, but in my role as a university professor, I’m there, representing all of those capacities.”

Vincent, who served as the first chair of the commission, said that the Boulé is well positioned to “influence and help to move the agenda” when it comes to the plight of Black males.

“What is very clear is me is that there is a strong commitment among our members to do this work and that’s what is so exciting and gratifying,” he said. “People understand that, if the Boulé does not do it, who will?”

New Board Chair: Time to Get Morehouse in Order