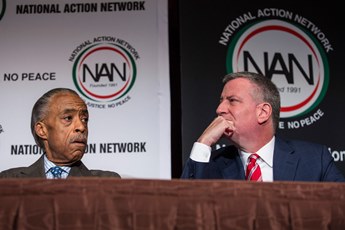 NEW YORK — A coalition of civil rights leaders are calling on the leadership of the U.S. Senate to immediately call for a vote to confirm Loretta Lynch as the nation’s next U.S. attorney general.

Lynch, the top federal prosecutor for the Eastern District of New York, was nominated five months ago by President Obama to replace Eric Holder, who announced that he was stepping down from the post. But Senate Majority Leader Mitch McConnell, R-Ky., has delayed a vote on Lynch, who would become the first African-American woman to hold the position if she is confirmed, saying that he is waiting for the Senate to first act on a human trafficking bill that has stalled over Democratic objections to an anti-abortion provision.

Sharpton, who was joined by the leaders of the NAACP, the NAACP Legal Defense Fund, the National Urban League, The Lawyers’ Committee for Civil Rights Under Law, The Leadership Conference on Civil and Human Rights, and The National Coalition on Black Civic Participation, said that they would stage around-the-clock campaigns until Lynch received a vote up or down.

“Times are too serious, things are too on edge for us not to have a sitting, confirmed attorney general to decide where we are,” Sharpton said, pointing to the death last week of Walter L. Scott, an unarmed Black man who was shot eight times by a White police officer in North Charleston, South Carolina. The shooting was caught on video and has ignited a firestorm of protests.

The officer, Michael T. Slager, has been fired from the police department and charged with murder. Sharpton said that a second officer, Clarence Habersham, should be prosecuted too. Habersham did not fire any rounds at Scott but wrote in a two-sentence report filed after the shooting that he had “attempted to render aid to the victim by applying pressure to the gunshot wounds” which seems to be at odds with the widely circulated videotape of the shooting.

“Given what I’ve seen, he certainly should be held accountable,” said Sharpton. “What charge, I don’t know. But certainly he should not walk away without facing some accountability in the criminal justice system.”

Sharpton has called for national policing legislation similar to the Civil Rights Act, in the wake of a litany of police shootings of unarmed African-American men.

“There must be national policy and national law on policing,” Sharpton told more than a thousand convention-goers who packed the ballroom for the nation’s largest civil rights gathering. “We can’t go from state to state. We’ve got to have national law to protect people against these continued questions.”

Sharpton compared the fight for police reform to the civil rights struggle, noting that activists did not try to fix discrimination in individual states or cities, but called for intervention at the federal government level.

“They fought for a national Civil Rights Act, a national Voting Rights Act,” said Sharpton. “It’s time for this country to have national policing.”

“It’s a broad point he’s making, and I think the way he made the analogy to the Voting Rights Act is the right one. We’ve got to figure out how to create the right relationship between police and community,” de Blasio said. “The vast majority of police do their job well and want to work more closely with the community. Obviously community residents want to work more closely with the police. But we have to create more of a national standard that says we all have to be on the same page.”

Activists, academicians, politicians and members of the Obama administration — including Secretary of Education Arne Duncan and Secretary of Housing and Urban Development Julián Castro, as well as Dr. Ivory A. Toldson, the deputy director of the White House Initiative on Historically Black Colleges and Universities, attended the annual gathering.

Students Could Save Thousands Under New Senate Bill

Bill Clinton, Activists, and Others Honored at King Day Celebration