A year ago, ­first lady Michelle Obama challenged college communities everywhere “to open up their campus to students who don’t always see themselves attending college.”

The Ohio State University (OSU) in Columbus took up that challenge in a bold way in December. It invited a group of young men from a nearby juvenile correctional facility to spend a day on campus. For the ­five young men, who ranged from 17 to 20 years old, the experience proved to be life changing. 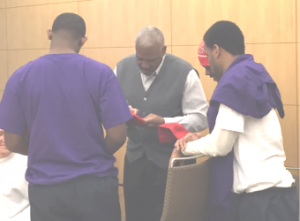 Before their visit, OSU, to these young men, was an out-of-reach dream, a storied institution with a slew of national football championships and famous alums. Not a place that could welcome and possibly matriculate someone with a juvenile felony record.

But the officials at OSU’s Center for Higher Education Enterprise (CHEE), which organized the visit, did just that. They warmly welcomed. They enthusiastically encouraged. They demonstrated that these young men—if they worked hard—could one day end up with a degree from OSU.

That a day on a campus like OSU could potentially change the trajectory of a young person’s life is exactly what the ­first lady’s challenge seeks to accomplish.

“Education is the key to success for so many kids,” Obama said in January 2014. “And my goal speci­fically is to reach out directly to young people and encourage them to take charge of their futures and complete an education beyond high school.”

She launched the White House’s higher education initiative, Reach Higher, a few months later, in May 2014.

CHEE director Terrell Strayhorn says it constantly pushes “partners and peers to really believe that college should be accessible and open to all, anyone who wants it. That would even mean students who have been overlooked as college material.”

Perhaps no students are more overlooked as college material than “high-needs” youth who have spent time in a juvenile detention center. When CHEE decided to take on the first lady’s challenge, it sought a partner who works with youth most likely to be discounted. “­That brought us into a meeting with juvenile youth services,” Strayhorn says.

Once connected, staff from Ohio’s Department of Youth Services (DYS) talked with CHEE staff about what is happening to juvenile youth, Strayhorn explains. “Because we’re all about student success and education, we asked DYS, ‘What do you know about the educational experiences of your youth?’ They said, ‘­There’s education going on in detention centers. A lot of our youth aspire to go to college; they don’t know how to get there.’”

What CHEE knows, Strayhorn says, is “how to inspire people to go to college and how to build pathways to get there.” CHEE is an interdisciplinary research and policy center that promotes the important role higher education plays in global society, especially through “access, affordability, engagement and excellence.” It was established just over a year ago and has a full-time staff of five.

Strayhorn and his colleagues organized a full day of activities for the young men from the Circleville Juvenile Correctional Facility, which is about a half hour south of Columbus. CHEE tailored the schedule to meet the group’s unique needs. In addition to listening to a session on college funding, FAFSA, grants and scholarships, and the dos and don’ts of college applications, the young men ate lunch in a university dining hall, to give them a “real” college experience.

To make the day more than a series of informational sessions, CHEE surprised them—and the DYS staff that accompanied them—when Archie Griffin, senior vice president for alumni relations and a two-time Heisman Trophy winner, stepped in the room and signed OSU caps provided by CHEE.

Gene Smith, vice president and athletic director, also spent some time with the campus visitors. Grin and Smith shared stories about how higher education made a difference in their lives. Griffin talked about a challenging time in his life playing football for the Cincinnati Bengals, explaining, “Everywhere we went, people kept telling us how bad we were. It was tough.”

With some changes and lots of determination, the Bengals turned around a losing streak. “­That’s what life is all about,” Griffin said. “How you handle those tough times is what’s important.”

To cap off the day’s events, Strayhorn revealed a final surprise to the group—tickets to the OSU vs. North Carolina A&T men’s basketball game.

Strayhorn and his colleagues knew they had to sweeten the experience with sports, something to which teen and young adult males could relate. Some in the visiting group were initially skeptical of the attention they were getting, given their backgrounds and some of the harsh circumstances of their lives.

One of the young men, Strayhorn recalls, turned to him, fighting back tears. CHEE staffers were, too. “He just was not sure why we were being this nice to them,” Strayhorn says.

One DYS youth told CHEE staffers, “­Three years ago when I was out there [in a gang], I would have never imagined being sitting here at OSU, like visiting a college, sitting here with you.”

Jennifer Sanders, deputy director for education and reentry services at DYS, witnessed it all. ­The visit, she says, “had all of these wonderful role models, young professionals from OSU.” Later, one of the young men told her “that it was a mind-blowing experience for him. He’s now pretty convinced that he wants to go to OSU.” (For privacy reasons, the young men from Circleville could not be interviewed for this article.)

“By the end of the visit, they were all convinced that OSU was the place for them,” adds Joey Kitchen, a postdoctoral researcher and program coordinator at CHEE who helped put together the day’s itinerary.

The young men from the Circleville center are taking junior and senior high school-level classes or have taken some part-time college courses and want to go further than that, Kitchen says.

Strayhorn says that nearly three-fourths of all juvenile youth aspire to go to college. “I don’t think the average citizen thinks about that,” he relates.

For students with a felony record who may also face financial and emotional support challenges, Strayhorn says he knows they “won’t be able to get from detention to college on their own.”

But by spending a day at OSU and getting an up-close look at what college life is like, these young men will have a chance to reach higher. Or, as Michelle Obama asserts, students like those from Circleville and other overlooked demographic groups “will be able to visualize their college possibilities.”

“Our goal wasn’t to recruit these students, but to expose them to a college campus,” says Royel Johnson, policy analyst for CHEE. “If they were interested in OSU, as a result, that’s great.”