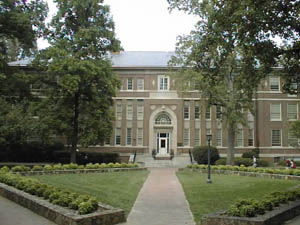 In a vote of 10-3, the trustees announced on Thursday that Saunders Hall would be renamed Carolina Hall.

The Board of Trustees at the University of North Carolina at Chapel Hill (UNC-Chapel Hill) have decided to strip the name of a confederate soldier and founder of the Ku Klux Klan (KKK) in North Carolina from a university building, saying that the “university made an error” in considering William Lawrence Saunders’ leadership in the Klan as a reason to rename the building after him.

In a vote of 10-3, the trustees announced on Thursday that Saunders Hall — which for more than 80 years bore the name of the former KKK member who was also an alumnus and trustee of the university from 1874 to 1891 — would be renamed Carolina Hall. The trustees also announced new curation and education initiatives surrounding the name change and said that a 16-year moratorium on renaming historic buildings will take effect “to provide adequate time for the new efforts to take root.”

While Black student activists applauded the decision to rid the building of Saunders’ name, they said that they were disappointed that the university rejected their idea to name the building after Zora Neale Hurston, the Harlem Renaissance writer who attended drama classes at UNC-Chapel Hill in secret before the university officially admitted students of color.

“Today’s decisions make an unequivocal statement about Carolina’s values and the importance of continuing to cultivate an inclusive and positive educational atmosphere for our campus,” said Dr. Lowry Caudill, chair of the Board of Trustees. “We want to prepare our students to be effective leaders with an understanding of history, but also with an eye to the future. These efforts to curate the campus and teach the past with greater context will present future generations with a more accurate, complete and accessible understanding of Carolina’s history.”
In 1920, university trustees cited Saunders’ service as North Carolina’s secretary of state from 1879 to 1891, his record as a compiler and editor of the colonial records that eventually became the foundation of the current State Archives of North Carolina, and his leadership of the KKK, as reasons for why a building should be named in his honor.

University officials said that, in removing Saunders’ name, they are adhering to the school’s existing policy on renaming campus buildings, which grants trustees permission to revoke an honoree’s name if continuing use would “compromise the public trust, dishonor the University’s standards, or otherwise be contrary to the best interests of the University.”

For more than a year, trustees surveyed students, faculty, staff, alumni and historians. Sources close to the trustees said that the decision to ultimately rename the building Carolina Hall was an attempt to move the controversy beyond the national headlines. The board also passed a resolution calling for the installation of a plaque in Carolina Hall that will state: “We honor and remember all those who have suffered injustices at the hands of those who would deny them life, liberty and the pursuit of happiness.”
This is not the first time that the university has been forced to confront its racist past and to remove the name of a White supremacist from a university building. In 2010, the Texas Board of Regents voted unanimously to change the name of a University of Texas at Austin dormitory that bore the name of William Stewart Simkins, a law professor who taught at the school in 1800s but who also had deep ties to the Klan.
UNC-Chapel Hill Chancellor Carol L. Folt said that she supports the trustees’ decision.

“Throughout this process, we have learned valuable lessons from our University’s past,” she said. “Now it’s time to live in this particular moment by creating an educational program that will honor our traditions of excellence, enlighten our campus community and make Carolina even stronger in the future.”

She said that the university is considering a variety of new initiatives to tell the full history of the flagship institution, including its evolution from the days of slavery through the civil rights era. She also said that she is considering creating an online orientation or non-credit course as well.

“Today is an important moment in the life of America’s first public university. Our Board of Trustees chose to fully engage with our campus community on this challenging naming issue that has surfaced periodically for years,” she said. “From the inclusion of students, senior administrators, faculty, staff and alumni, to scholars, experts and members of our broader community, this has been an engaged process toward a solution that we as an institution comprised of people with diverse perspectives can commit to. The comprehensive, long-term solution they developed is a bold move for our University at this time.”