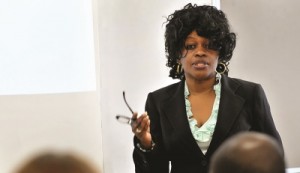 When Afua O. Arhin arrived at Fayetteville State University (FSU) to take over the nursing program in the fall of 2010, the program had been suspended due to low pass rates on the national nursing licensure exam.

But instead of viewing the problems at the beleaguered nursing program as a liability, Arhin viewed them as an opportunity to prove her mettle.

“I know it sounds crazy, but that’s what drew me to the position,” Arhin — former associate dean of the School of Nursing at Grambling State University and a former faculty member at Florida A&M University — tells Diverse. “I’m one of those strange people that likes challenges.”

She says the fact that the program was inactive made it easier to bring it back to life.

“It’s very difficult to implement changes when you have a program that has its own philosophy,” Arhin says. “But when you come in and have a blank slate and you can recruit people that have the same philosophy and same perceptions of student outcomes as you, it makes it a lot easier.”

Indeed, whereas just a few years ago the nursing program at FSU was on the brink of becoming extinct, the program has since bounced back in a spectacular way.

More specifically, the nursing program at FSU recently became one of just two in North Carolina to achieve a 100 percent pass rate in 2014 on the National Council Licensure Examination (NCLEX), which is the test required for entry into the nursing profession.

The national pass rate is 69 percent and the state pass rate in North Carolina is 85 percent for first-time takers, statistics show.

Although only 15 of the 25 students that were originally admitted to the program after it reopened completed their bachelor’s degrees in December 2014, all 15 passed the NCLEX on their first try, university officials say.

“These stellar results prove the quality of the curriculum, faculty, and departmental leadership we put in place after making the difficult decision to close our pre-licensure program,” Fayetteville State University Chancellor James A. Anderson said in a statement.

Arhin, a native of Ghana who grew interested in nursing at age 4 after being inspired by an aunt who served as a nurse in the country’s navy, says the following factors helped the nursing program achieve its dramatic turnabout:

· A new staff. “I had the opportunity to recruit and hire a team of passionate, talented faculty who are dynamic in the classroom as educators and also are competent, caring, proactive student advisers,” she says.

· A revamped curriculum. “Content areas that are germane to much of nursing practice were strengthened,” Arhin says. “I also collaborated with faculty from the sciences to include some important concepts related to nursing in the prerequisite courses that pre-nursing students are required to take.”

· Higher entry requirements. “There is abundant literature that suggests the clear correlation between student performance in math and science and success in nursing,” Arhin says. For that reason, she says, the overall minimal GPA for entry into the program was raised from 2.75 to a 2.8, and a greater emphasis was placed on math and science grades. “It’s not really too much of a stretch, but you can have students with OK GPAs but not math and science,” Arhin explains.

· Remediation. “We implemented a grueling standardized assessment protocol in each course, which allows early identification of curricula gaps or need for student remediation,” Arhin says.

· Smaller class sizes. Whereas there used to be 40 or 50 students in a class, class sizes are now capped at 25 to enable more one-on-one instruction.

Even though smaller classes cost more, Arhin says it’s worth it.

“I personally think if the student goes through the program and can’t practice because they don’t pass the licensure exams, we’ve done them a huge disservice because they’ve invested four years,” Arhin says.

She cited the example of a nursing school graduate who works at a wireless company because the student couldn’t pass the nursing exam.

“I can’t sleep at night knowing that I played a role in that,” Arhin says. “I would rather [have] a small class with the ability to work with them one on one and make sure they are successful.”