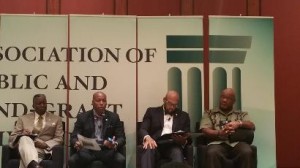 ATLANTA — For the second year in a row, a diverse group of college presidents, chancellors, deans and faculty from Historically Black Colleges and Universities spent four days strategizing over how best to meet the needs of their students.

The HBCU Student Success Summit sponsored by the Association of Public and Land-grant Universities (APLU) drew more than 100 participants from across the nation, with the focused goal of sharing best practices about student success and brainstorming ways to improve the overall retention and degree completion for students attending HBCUs.

“Anytime you get members of the HBCU family together to talk about current and relevant issues is a good thing,” said Dr. Cynthia Jackson Hammond, president of Central State University in Ohio. “This has been an opportunity for great minds to meet and develop strategies for our institutions.”

The workshops and plenary sessions focused on a wide range of topics, including first-year experience programs, service-learning initiatives, student assessment, eradicating hazing on campus, and finding alternative approaches to increase revenue and endowments at HBCUs.

“We are not a monolithic group,” said Dr. William B. Bynum Jr., president of Mississippi Valley State University. “We are not trying to be everything to everybody.”

In an era of fierce competition, HBCUs have to be competitive among themselves and develop a particular niche, said Dr. Mickey L. Burnim, president of Bowie State University.

Even still, as many HBCUs have been forced to slash key programs and initiatives on their campuses, Dr. Kevin Rome, president of Lincoln University of Missouri, said that his university continues to thrive.

“Not all of us are struggling the way you hear,” he said. “We’re not rolling in the dough, but we’re paying our bills.”

For those HBCU institutions that are struggling, several participants have suggested that they might consider merging with other institutions in an effort to streamline academic programs and cut financial costs.

Author and motivational speaker Kevin Powell delivered a rousing speech at the close of the summit that was followed by a panel discussion that highlighted the recent activism of college students who sprung up to protest the recent deaths of unarmed Black men in Ferguson, Mo.; Staten Island, N.Y.; and Baltimore, Md.

But Powell also challenged HBCU presidents to become more engaged in the life of their students.

“Some of these schools I go to, there is a fear of the president, chancellor and deans,” said Powell, who added that Dr. Walter Kimbrough at Dillard University has created a model for how HBCU presidents should engage with their students.

Kimbrough, who is affectionately called the “Hip-Hop President,” is widely popular at  the New Orleans university and even teaches a course each year.

“Some of us forgot what it’s like to be young,” said Powell, who chastised some HBCUs for encouraging the use of racial profiling tactics on their Black male students by campus police. “There’s something sick about that. We need to listen to the voices of young people.”

Dr. RoSusan D. Bartee, interim vice president for the Office of Access and Success at APLU, said the purpose of the summit was to stimulate discussion and to share ideas.

“The 2015 HBCU Student Success Summit, as hosted by the Office of Access and Success in the Association of Public and Land-grant Universities, provided a convening venue for HBCU administrators, faculty, students and constituents to engage in important dialogue about the multifaceted dimensions involving student success,” said Bartee. “The plenary and concurrent sessions consistently revealed the need for differentiated, strategic approaches to be instituted toward enhancing degree completion efforts. No one-size-fits-all approach will manifest the desired outcome.”

Minority Bachelor’s Degrees on the Rise: