On His Way Out, Francis Says HBCUs Here to Stay - Higher Education

On His Way Out, Francis Says HBCUs Here to Stay 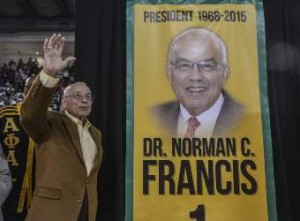 Dr. Norman Francis concluded a 47-year career as president of Xavier University in Louisiana on Tuesday—making him the longest serving HBCU president and second-longest tenured president of any U.S. institution. On his way out the door, the man who could be seen as a godfather of HBCUs reflected on the state of the institutions and the path ahead, which he said looks bleak in many ways.

The state of HBCUs “has changed, as you can imagine, measurably since I have been president of (Xavier) and it has been changing rapidly in the last decade,” said Francis in a recent interview.

And he foresees “another tough decade” ahead.

“It’s not to say that we have not had past decades that were tough, but this is going to be one that is going to challenge the leadership of the institutions in taking a hard look at their budgets and their programs to make sure they’ll be in concert with the ability to continue to offer a quality education,” he said.

Part of the problem, said Francis, is the need to constantly defend and assert the value of the institutions, which no other group of institutions is ever asked to do on a collective scale.

“We are facing the traditional perception that all Black colleges are going to go out of business, or they should go out of business. That is foolish,” Francis said. “We who operate the institutions know we have a major job to continue to do (in educating Black students) as we’ve done for the 100 past years.”

“When I look at the future, it’s going to be a future that will demand strong leadership from boards, from faculty and from staff, the same dedication in terms of commitment to students that we’ve always had, we’re going to have to have more of that, because not all of the students that I’m talking about are going to get the beneficiary of having a quality high school education. Some will, and we have students who can go anywhere they want to go who are coming to HBCUs, but there are some who need us and that has been true over the years,” he added.

But recent actions and proposals on the federal level continue to threaten the viability of the institutions as a whole, he said.

“The country itself and the federal government have gone through sequestration, cutting the budget, and many programs—and more than I thought two, three years ago—that were targeted for minority institutions, we got hit harder than most schools by cuts mandated by the Congress. We fought hard and we have maintained some degree of protecting what we have fought hard to keep since the 60s almost,” said Francis.

Not only has federal policy made a difference, but rapidly increasing state cuts are also affecting HBCUs in major ways, said Francis.

“The public institutions have been faced with some of the same problems that private schools have been faced with—namely, the ability to get the amount of dollars from their state resources in order to be effective in running a quality and competitive educational program,” he said. “That is the biggest problem that we have seen in states across the South in particular: Budgets have been cut across the board in all of the quality of life issues and education has been particularly impacted by that.”

These challenges trickle down to impact the students whom HBCUs traditionally serve, he said. “Students have been of course impacted because institutions have not gotten the resources to provide whatever aid that might have been needed to bridge the gap between federal and state aid and what families have been able to put of their own resources.”

For this reason he said, HBCU leadership must pay careful attention to and become fervent advocates for increased Title III and Title IV funding.

“So we have always fought to make sure that TItle III and Title IV … are maintained, and I can tell you that is a major part of the immediate future for HBCUs, whether they are state or private. And if you watch the numbers, state institutions have dropped in enrollment and private institutions that couldn’t afford to drop in enrollment” are down as funding through those programs has also decreased, he added.

The bottom line, he said, is that “paying for college attendance in the last ten years … has been a major problem, and what it has done is it has cut our enrollments down more than we would have ever expected them to do, and that’s still true today, and it has impacted our ability to recruit students.”

Though Francis acknowledges that the issue of college affordability is not unique to families of students attending HBCUs—“This is not simply a Black college problem, it is a problem with America as a whole and all of higher education,” he said, “where families who were once middle class families and felt like ‘we can handle our education of our children’” are now struggling to do so—he said Black colleges are being hit the hardest, because they have traditionally worked to do more with less.

“For us, we still are educating first-generation college students and that presents an extra problem for us. So…things have changed where if we don’t get the assistance we need, we won’t be able to do it as well as we have been, and that’s not going to be good news,” he said.

Referencing “talks about in the Washington arena, in the beltway, about keeping your tuition down,” Francis reminded that “Black colleges have kept their tuition down for so long that you can’t [even compare it] to what other tuitions are in the country [at] state and private colleges alike.”

Using his own institution, he said Xavier’s tuition for the 2014-2015 school year was “still under $20,000. … And we’ve got schools here in the city—high schools—that cost more than we charge. … We are known for working with students and particularly with families that we have on campus … we estimate that 40% of our freshman class is under $40,000, and that’s no money at all when you have two or three children.”

For their part, there are three major things that HBCU leaders can do to make sure they are able to endure the tough times ahead, Francis said. First, they will need to assert and maintain a strong institutional brand, which includes forging partnerships, both domestically and abroad, and continue to evaluate the strength of programs offered—particularly in STEM fields.

Another key, he said, is keeping in touch with alumni and knowing what they are doing post-graduation, which would help with marketing the strength of the institutions’ programs.

All in all, Francis said HBCU leaders know they are not “looking for some rose garden” of circumstances that will favor the institutions, and it will take strong leaders at every level to guide the schools through the network of challenges they will be facing in an increasingly contentious climate for HBCUs in the American higher education landscape.