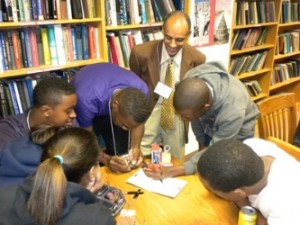 Despite having to forgo the petroleum engineering studies he originally sought at West Virginia, Campbell forged an entirely different yet rewarding path. Between his first and second year at NCCU, he worked with a faculty mentor, landed a spot in a summer honors research program and became a scholarship student.

This past school year, Campbell, who is on track to complete his bachelor’s degree in spring 2016, placed first in the computer science and information management track of a research competition at the 2015 Emerging Researchers National Conference in STEM.

“As a STEM student at North Carolina Central, I get acknowledged for that and for my hard work,” he says.

As one of thousands of students enrolled in an HBCU STEM program, Campbell has benefited from a range of best practices that experts have long cited as key factors in STEM student success at the undergraduate level. Among such practices are intensive faculty and peer mentoring of students, summer bridge courses, peer tutoring, supplemental instruction and student pursuit of research with faculty mentors.

One “reason why HBCUs remain so necessary is that they still have an outsize role in preparing students to meet urgent national priorities in STEM fields, in filling teaching jobs, and in uplifting boys and men of color,” U.S. Education Secretary Arne Duncan told officials last year at the National HBCU Week Conference in Washington.

Dr. Claudia Rankins, program director of the Historically Black Colleges and Universities Undergraduate Program (HBCU-UP) at the National Science Foundation, oversees the agency’s HBCU-UP funding program. The program has invested more than $400 million in 85 historically Black schools since the late 1990s to improve and expand undergraduate STEM programs, according to Rankins.

“The program was started because we’re looking at the changing demographics of the U.S. population and realizing that this country is moving to a majority-minority population, and that in STEM [minority] groups are severely underrepresented,” Rankins says.

A former dean at Hampton University, Rankins says that, while “HBCU-UP grants have been instrumental in moving undergraduate STEM education forward” at historically Black schools, the program has also helped schools build on the STEM education practices they had already pioneered in past decades.

“Let’s take the example of peer mentoring. When there was no money to hire tutors, then [HBCUs] would have peer mentors. … Undergraduate research became really popular and mainstream in the 1990s, but I remember that, at HBCUs, [the practice] goes way back when undergraduate students were involved with their mentors,” she says.

“Many of these best teaching practices to retain students and graduate them have happened at HBCUs traditionally,” adds Rankins.

HBCUs have invested heavily in developing summer “bridge” programs and in improving “gateway” STEM courses with curriculum and academic support innovations. These measures enable a broad range of students with varying levels of preparation to successfully navigate into their intended majors.

Michael Shiferaw, a rising junior majoring in electrical engineering at Morgan State University, credits the Foundations of Mathematics (FOM) class, an online pre-calculus and mathematics review course he took the summer before his freshman year, for enabling him to avoid delays in moving into his intended major. ­The goal of FOM is to help freshman engineering students pass Morgan State’s placement exam with the highest score possible, thus reducing the need to take developmental math.

“[FOM] really helped me get on track for my [science and engineering] courses,” said Shiferaw.

Dr. Yacob Astatke, an associate professor and associate chair in the electrical and computer engineering department at Morgan State University, developed the (FOM) course in 2000. ­The five–week course provides both online and in-person instruction with students taking the course online during the week and meeting in teams on Saturdays with undergraduate tutors.

FOM analysis from 2004 to 2014 found that more than 75 percent of FOM students began their Morgan State education in math courses more advanced than basic algebra and therefore significantly increased their chance of completing the engineering curriculum in fewer than six years.

“Once students are placed in the right math class, they have a better chance of graduating in five or six years. … ­The one thing we want to avoid is for them to be placed in the wrong math class and repeating material over and over again,” Astatke says.

Schools such as Morgan State have developed bridge initiatives like the FOM in part to remain open and accessible to students who are disproportionately more likely to hail from low-income families and to have graduated from low-resource high schools.

With external funding, a number of HBCUs have sought solutions in curriculum innovations as a means to improve faculty teaching methods and student learning outcomes.

At Florida A&M University (FAMU), Dr. Maurice Edington, dean of the College of Science and Technology, has set out to improve teaching and learning through “a complete restructuring of the undergraduate course curricula and instructional approaches in the areas of mathematics, chemistry, physics, biology and computer science.”

What FAMU’s College of Science and Technology is attempting is “to beef up both avenues and our SCALAR [Student-Centered Active Learning and Assessment Reform] grant is one of the ways we’re addressing that,” Edington says, noting that external funding has become essential to sustaining and expanding STEM education best practices.

“We would not have much significant success without external funding, because as a public institution we don’t get the level of funding that we historically have gotten with state support diminishing over the last decade,” he says. “So external funding is what provides us with the resources to implement new initiatives and programs based on best practices.”

Dr. Caesar Jackson, interim dean of graduate studies at NCCU, explains that, as STEM students move on from their freshman and sophomore years into their majors, it becomes critical they have opportunities to pursue research as well as participate in extracurricular and off-campus activities connected to their STEM majors.

Jackson is principal investigator of the DREAM STEM (Driving Research, Entrepreneurship, and Academics through Mastering STEM) program at NCCU. Supported by an HBCU-UP grant, the program aims to “increase science, technology, engineering and mathematics enrollment, particularly in chemistry, environmental, earth, and geospatial sciences; mathematics; and physics programs” by African-Americans.

­The DREAM STEM program is structured such that, while it exposes undergraduates to entrepreneurship in science, a topic rarely covered in STEM education, it steeps students and trains faculty in tried-and-true best practices around student research, faculty development and student immersion in the scientific community.

“We try to help individual students develop [his or her] identity as a scientist. And part of that is being in a community of students, faculty and staff,” Jackson says.

­That means engaging students “in activities, such as field trips to facilities where research is taking place, going to national meetings [and] giving students even at the freshman level the chance to experience what a national research science conference looks like,” he explains.

In addition, students learn not only how to conduct research with faculty mentors but they learn how to present research at scientific meetings and conferences. “We regularly meet with them, keep track of what’s going on during their experiences during the summer and with presentations that they made. And then of course, their summer research experience ends with a program where they make formal presentations at a closing ceremony,” Jackson notes.

“­Then we give them an opportunity to continue that research with the faculty member, or a different research team during the academic year,” he says.

­That proved to be the case for Daquille Campbell the summer of 2014 and the subsequent fall when he won scholarship support as a DREAM STEM student. His research experiences continued through early 2015 when Campbell traveled to Washington, D.C., to participate in the Emerging Researchers National Conference in STEM.

“During the academic year, there are a number of student research conferences. … We select some specific ones we target to attend on an annual basis. … We fund [student] travel and go up as a group,” Jackson says.

As Campbell says, “I’m most likely going to attend graduate school after working for a while.”