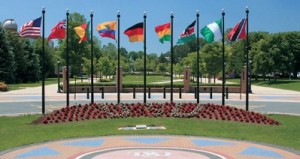 In 2005, Delaware State University’s enrollment stood at just over 3,700; 79 percent of the students were African-American, 14 percent were White, 1 percent Hispanic and 1 percent Asian.

By 2014, enrollment at this historically Black university had ballooned to the highest in its history:  4,644. University officials are expecting a slight bump in enrollment this year. The demographics have changed dramatically. Now, 63 percent of the students are Black. White enrollment is down slightly—to 12 percent. Hispanic enrollment has soared to 5 percent. The percentage of students who categorize themselves as “other” is nearly four times what it was in 2005—at 19 percent.

Diversity, one of the institution’s core values, is prominently celebrated throughout the campus. International students sometimes team up with cafeteria staff to cook dishes from their native lands for the student body. An assortment of international and Hispanic student events dot the academic calendar.

In an age when most HBCUs are struggling with declining enrollment, Delaware State University is thriving.

University officials say their good fortune is due to a broad range of factors, including a revamped marketing strategy and a significantly heightened commitment to building partnerships with universities abroad. Delaware State currently has MOUs with 25 universities in 12 countries and has stepped up its efforts to encourage students to participate in study abroad programs.

Dr. Harry Williams, who became president in 2010, insists that producing competitive graduates, not increasing enrollment, is what sparked these initiatives.

“Our sole focus is … being relevant and competitive,” says Williams. “If you don’t do these things you will not survive. The plus side is that it has helped enrollment. … A lot of HBCUs are struggling with enrollment. If you don’t change your business model, you will be out of business. You have to look at other avenues to be relevant and be competitive.”

Williams recently returned from China, where he participated in a commencement ceremony at a partner university. Seventy-five students graduated with degrees in accounting, earning dual degrees from both institutions. A total of 360 students are enrolled in the program. The accounting courses are taught by Delaware State faculty in China. This year’s graduates were part of the first cohort.

Delaware State officials say the relationships with these universities have been a great marketing tool for their institution. It heightens visibility abroad and attracts students.

That’s how Pengrui Hui, who attended college at a partner school in northeastern China, learned about Delaware State. Hui, who will complete his doctorate in mathematics this summer, enrolled at Delaware State shortly after getting his bachelor’s degree in 2010. He says he was enticed to pursue graduate school there because he was already familiar with the university’s academic programs and because the university’s international student office was friendly, accommodating and eager to help him.

Delaware State has also been aggressive about pushing students to study abroad. Those numbers have been rising steadily. While some go abroad for a semester, others go for a short term, for about six weeks. They take classes during their time abroad. At the end of the term they do a presentation that highlights what they learned and how they intend to use that knowledge when they return to the U.S.

“Majority of these students are African-Americans, and, for many of them, it is the first time they’re traveling abroad and the first time they’re getting on a plane,” says Williams. That kind of exposure, he says is “something that’s a very important part of the educational experience. A college environment can create that for you.”

Still, these changes haven’t occurred without some questions about the future of the school’s Black heritage.

“I’ve had questions posed and I’ve had to address them,” says Williams. “We will always be an HBCU and we will continue to embrace it. Part of doing it is celebrating it and recognizing that.”

He says some colleges that were founded for religious purposes but now cater to a broader demographic still find ways to preserve and celebrate their religious identity. The same goes for many women’s colleges that have gone co-ed, he says. He is confident Delaware State can do the same.

“We will celebrate our existence and how we got created, but to stay alive we have to do things differently,” he says.