Convictions vs. Tax Exemptions: Christian Colleges May Have to Make Choice - Higher Education

Convictions vs. Tax Exemptions: Christian Colleges May Have to Make Choice 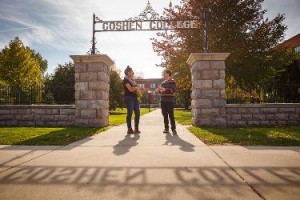 Goshen College is among a few Christian institutions that have recently changed their policies to allow for the hiring of faculty and staff in same-sex relationships. (Photo courtesy of Goshen College)

When the Supreme Court ruled that all states must recognize same-sex marriages in June, it turned a spotlight on Christian colleges and universities.

Some conservative Christian schools, due to their interpretation of Scripture, reject homosexuality on religious grounds. Most accredited Christian schools in the United States are tax exempt, as is true of the majority of secular colleges and universities. To maintain their tax-exempt statuses and the ­financial privileges that position confers, schools must abide by federal and state law.

The question that naturally arises is whether Christian institutions will have to change their views on homosexuality in order to maintain their tax-exempt statuses.

When the Obergefell v. Hodges decision came out in June, Chief Justice John Roberts argued in his dissenting opinion that religious institutions cannot expect to maintain the protections they currently enjoy, writing:

“Hard questions arise when people of faith exercise religion in ways that may be seen to conflict with the new right to same-sex marriage — when, for example, a religious college provides married student housing only to opposite-sex married couples. … Indeed, the Solicitor General candidly acknowledged that the tax exemptions of some religious institutions would be in question if they opposed same-sex marriage. … There is little doubt that these and similar questions will soon be before this Court. Unfortunately, people of faith can take no comfort in the treatment they receive from the majority today.”

Solicitor General Donald Verrilli opined that a decision to legalize same-sex marriage “is certainly going to be an issue” for the continuing tax-exempt status of some religious institutions in oral arguments in April.

Others, however, say that the status quo will not change, and if it ever does, it would be after due deliberation over the course of years. If Christian schools were to lose their tax-exempt statuses, that directive would first have to come from the IRS.

For the time being, the IRS appears to be unlikely to make such a move. IRS Commissioner John Koskinen promised to not challenge the tax-exempt status of Christian colleges and universities at a Senate hearing in late July. Koskinen said that it is not the IRS’s “position to make public policy,” but rather to implement existing laws.

One of the fears for Christian colleges is that the Obergefell v. Hodges decision will pave the way for lawsuits similar to the one between Bob Jones University (BJU) and the IRS of three decades ago. BJU did not admit Black students until the 1970s and prohibited interracial dating until 2000. After a 13-year legal battle over the interracial dating ban, the IRS stripped BJU of its tax-exempt status in 1983.

Robert Tuttle, a professor of law at George Washington University, tells Diverse that fears about colleges and universities losing their tax-exempt status are overblown. “The IRS has either revoked or denied tax exemption of religious institutions only one time, and you have to see that in the midst of a broad campaign in the 1970s of virtually every executive branch to stamp out racial discrimination,” Tuttle says.

While Christian colleges and universities may not face much pressure from the federal government to change their policies on the LGBTQ community, change already appears to be coming from within, at least at a handful of schools. Some, such as Cedarville University, are moving in a more conservative direction. Others are becoming more inclusive. Baylor University, for example, the largest Baptist university in the world, made it known in July that it had modified its sexual conduct policy to remove a ban on “homosexual acts” earlier in May.

Two Mennonite schools, Goshen College and Eastern Mennonite University (EMU), took a slightly different tack, changing their policies to allow for the hiring of faculty and staff in same-sex relationships. Goshen and EMU, which are sister schools, previously held that homosexuality was permissible among faculty and staff so long as LGBTQ individuals remained celibate.

Their decision sent shock waves through the larger Christian college and university community. The two schools are currently members of the Council for Christian Colleges & Universities (CCCU), a nonprofit based in Washington that represents the interests of 122 member institutions in the United States. Some schools, however, say that either they or EMU and Goshen will have to leave the organization due to ideological differences. One Tennessee school, Union University, left the CCCU in early August.

“ … Marriage is at the heart of the gospel,” Union President Samuel Oliver wrote in a letter to CCCU leadership. “ … To be identified with an organization that fails to address those issues with a unanimous voice weakens our argument for a fundamental principle.”

CCCU, for its part, is engaging its member schools in careful deliberation and has said that it will not deliberate on Goshen and EMU’s decision until the next CCCU Presidents Conference in January. The issue at hand is whether Goshen and EMU will become non-voting affiliate members of the CCCU or leave the organization altogether. Other CCCU schools threatened to part ways with the CCCU if EMU and Goshen become affiliate members.

Representatives at Goshen and EMU say that they hope to “remain at the table” for as long as possible with the CCCU. They also say that their decision was inspired less by the Supreme Court decision and more by an internal decision-making process that coincided with the Mennonite Church USA’s reconsideration of its stance on gay marriage.

In July, delegates of Mennonite congregations met in Kansas City for their biennial convention. While the delegates voted to uphold the traditional understanding of marriage as between a man and a woman, to prohibit pastors from performing same-sex marriages, and that homosexuality is a sin, they also voted for greater “forbearance.”

The church will now practice forbearance toward congregations, churches and pastors that are tolerant of the LGBTQ community.

As a statement of the Mennonite Church USA’s webpage reads, “The two statements clearly stand in tension with one another. Many would say that they are even contradictory.”

Nevertheless, the decision opens the door for greater inclusivity of the LGBTQ community within the church. Jodi Beyeler, director of communications at Goshen, says that the conversation about LGBTQ issues had been ongoing at Goshen for at least 40 years. More recently, the school felt prompted to act by the Goshen College Open Letter, which advocates for the hiring of faculty in same-sex relationships and garnered 1,700 student and alumni signatures since it started being circulated in 2011.

“It’s been several years of reviewing what our current practices are as a Christian organization,” Beyeler says. “There’s prayer and a faith component of seeking God’s guidance, but also listening to various constituencies and stakeholders.”

Goshen alumnus Patrick Ressler, who helped create the letter with other students, tells Diverse in an email, “As a senior at Goshen College approaching graduation in 2011, I was struck with a deep sense of sadness that the college I had called home for four years would not welcome me back as an employee. The college that had prepared me to work in the professional world did not see me fit for employment because of my sexual orientation.”

EMU began its deliberations a few years ago, culminating in a six-month listening period last year. Andrea Wenger, director of EMU marketing and communications, stresses that EMU did not decide to change its hiring policy as a consequence of the convention. Rather, the school put its discussion on hold out of respect for the church. “We didn’t want our process to get in front of the church’s process,” she says.