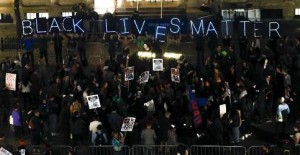 As students of color continue to find ways to process the events that have unfolded recently across the country, faculty and staff are also working to find ways to help students with this process—and cope themselves.

From changing curricula to even a new textbook titled Black Lives Matter to finding their places in protests with the students, the #BlackLivesMatter Movement is finding a place in not just higher ed but K-12 discussions as well.

Macalester College professor of American Studies Dr. Duchess Harris said that, at the beginning of the fall 2014 semester, she found herself incorporating news clippings and materials about Mike Brown and some of the others slain by police around the country.

Because the semester started just a few weeks after the events in Ferguson burst into the nation’s consciousness, Harris said she knew her students would be looking for an outlet to discuss those things and would be looking to make historical connections.

So when she was approached by Abdo Press to help author a textbook to provide such a tool, Harris said she was happy to do so.

The book, which covers a three-year history from Trayvon Martin to Freddie Gray, is primarily geared toward sixth-graders, though Harris said she believes “this is a useful tool for many age groups, and I think it’s an important way to open up dialogue.”

For some institutions at the heart of the conflicts, controlling the dialogue became crucial.

“We were impacted significantly, from the standpoint of the images that were being shown,” said Morgan State University President Dr. David Wilson, whose Baltimore campus was thought by parents to be at the center of the protests unfolding in the wake of Freddie Gray. “We had to immediately communicate with our university community about what was happening” because many families were not getting accurate information about the extent of the threat in the city.

Many students who were enrolled at the time, said Wilson, were “very concerned about what they perceived about the senseless killings.”

So, “in the great tradition of Morgan,” they organized “peaceful protests” and clean-up efforts, said Wilson, who joined in some of the efforts.

Morgan, like many HBCUs across the country, has often been at the “forefront to embrace community engagement and to show young people that college is a way for them to break the cycle” of violence against those who look like them, Wilson said.

Morehouse College alumnus Donovan Ramsey wrote for The National Journal this week that HBCUs are providing a place of solace for Black students seeking shelter and comfort during this period in American history.

Ramsey interviewed a number of students attending his alma mater and found that HBCUs are considered a “sanctuary” for these students in such an unsettling time in the country.

“Behind these gates, I feel so safe. I really do,” one said. “I feel like black people in America have an understanding between each other and there’s relative safety among the group.”

Clark Atlanta and Morehouse professor Illya Davis said part of the focus on campus is promoting conversation that provides analysis “of the social and political conditions that contribute to intramural and intermural conflicts and grievances.”

A recent campus discussion moved from a theoretical to a practical discussion of “programs that will be initiated in the West End [Atlanta] community that will buoy self-worth and dignity in the community—e.g., free financial tutoring, primary and secondary school tutoring, health fairs that redress the unhealthy food options and limited choices found in the West End,” said Davis.

“It was imperative that we focus on Black lives as a priority instead of Black death. We seem to value post factor.”

“The dialogue is important primarily for students to not only know their history, but when they’re going out into the workplace, when they’re working for the community, they know that they are charged with … uplifting the community,” said Spelman College senior Danyelle Carter.

“HBCUs were already founded on advocacy for the Black community, so for us to not be a part of the conversation, it would be a disservice to our community,” Carter said. “It’s imperative that we participate in these kinds of conversations, either online or offline. I think a lot of times, we fear these conversations on race, but if you’re going to come through these schools, we have a responsibility to have these discussions.”

Brandeis University President to Step Down, Take Job at Yale

Number of Blacks Joining Military Down