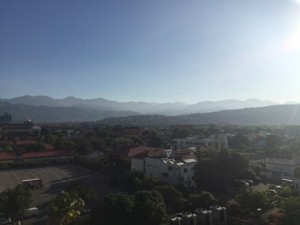 It was precisely those reasons that Dr. Jerlando Jackson, director of the Wisconsin Equity and Inclusion Laboratory at the University of Wisconsin and chair of the International Colloquium of Black Males in Education, said Kingston was the place colloquium leaders wanted to gather.

Jackson acknowledged that other parts of the island might seem more suitable for such an event—even skeptics questioned the selection of Kingston over other regions, like Montego Bay and Ocho Rios.

Amid a political climate in which the nation’s citizens are simultaneously petitioning for reparations for African descendants whose ancestors were enslaved and organizing to express outrage over a plan out of London to bring a maximum-security prison to the island—one that would house the worst offenders from the U.K., U.S., Canada and the Caribbean—and an environment in which conveners are sometimes accompanied by armored guards during travel, scholars, practitioners, students, policymakers and those with the ability to make funding decisions descended upon Kingston this week to discuss challenges facing Black males in their pursuits of education.

“We wanted to have a pretty urban opportunity to explore urban challenges and we think that Kingston provides that,” Jackson said.

“Place matters,” said Dr. James L. Moore III, director of the Todd A. Bell National Resource Center on the African American Male at Ohio State University. “Arguably, this is the most urban space that we’ve held the colloquium.” (Previous colloquiums have been held in Atlanta, London and the U.S. Virgin Islands.)

For many, the parallels between some of the recent activity in the United States and some of the conditions facing the residents of Kingston provided more of a draw for participation in this year’s colloquium.

“There was a natural and immediate synergy between the groups [from the Wei Lab and Bell Center and the University of the West Indies] because we have similar mandates” to provide opportunities for marginalized groups,” said Professor Verene Shephard, director of the Institute for Gender and Developmental Studies at the University of the West Indies, which served as the local host to the colloquium.

“Calls for reparations for African descendants [in Jamaica] and the growing Black Lives Matter movement [in the United States] … both problematize the social environments through which social justice has been denied” to Black males, specifically, but Black people generally, she said, which has resulted in the denial of social justice, lack of education and poverty in both places.

Sen. Floyd Emerson Morris, who serves as president of the Senate in Jamaica’s House of Parliament, said he is disappointed by the lack of emphasis on education experienced by Black males in his country.

“Education in any society is an enabling and transformative tool,” Morris said. “This is even more so important for the Black race and, in particular, Black males.”

“We have to step up to the plate and we have to make our men understand that when they invest in education … it will [lead to] better family life, better opportunities,” he said. “If we don’t get our men to invest in education, it is going to pose a danger to our society. It is already posing a danger to our society [by way of] some of the criminality that is taking place and some of the anti-social behavior that we see taking place in our males.”

Jackson said the diversity of backgrounds and professions of those in attendance will help propel the discussion toward solutions, rather than the typical conference pattern of privileged individuals discussing problems affecting a population that would not likely ever have access to the discussion forum.

“From a program standpoint, we try to build the program so that it is not just researchers talking to each other,” he said.

Moore agreed, saying, “I see the colloquium as being an individual college—an incubator for knowledge and sharing that will build capacity for scholars from both countries.”

“What’s most meaningful is when people can have viable, strong, meaningful conversations [in which they focus on] what works and how to proliferate what works, not only in our own spaces, but across the globe,” Moore said.

Though conversations around Black male achievement are the “sexy topics” right now, Moore and Jackson said the road to solutions requires a serious commitment from those involved, even after the nation has moved on to a new favorite buzz word, after the funding sources begin to dry up, and after there is no longer a president in office who has articulated a desire to be intentional about raising success outcomes for Black males in the country.

“This is work,” Jackson said of the colloquium’s purpose, “and we’re going to come to places that may not be on one’s vacation list. … This is a global effort to cultivate and sustain” some of the best ideas, policies and practices around elevating the educational achievement and success levels of Black males across the globe.

“The dynamics around Black males require all of us to play a role” in finding solutions, Jackson said. “It affects us all.”

A Year in Review: Gone But Not Forgotten