One Year After Taking the Helm of The New School, Dr. Dwight McBride is Looking to the Future - Higher Education

One Year After Taking the Helm of The New School, Dr. Dwight McBride is Looking to the Future

When Dr. Dwight McBride learned that he had been tapped to become the ninth president of The New School in New York City, he was ecstatic.

The institution’s reputation for tackling social justice issues and its focus on progressive education, seemed like a natural fit for the prominent literary scholar who had already established his bona fides in faculty and administrative posts at the University of Pittsburgh, University of Illinois at Chicago, Northwestern University and Emory University, where he served as provost and executive vice president for academic affairs.

But none of his previous experiences could have adequately prepared him for the monumental task of leading a private research institution, located in the heart of New York City, through the biggest challenge that higher education has ever had to face: COVID-19. 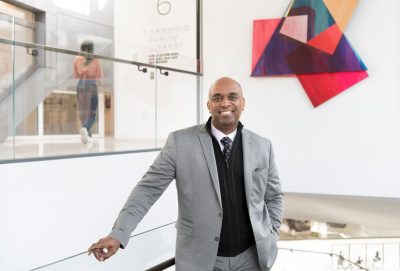 On the March day that he arrived by plane into New York City—several weeks ahead of his official first day at work—the city had completely gone dark.

“It was eerie,” McBride recalled in a recent interview with Diverse. “It was almost like the beginning of a horror movie. It was isolating, surreal, unbelievable, being in your new home that you’ve been excited about exploring and getting to know, but being locked down and in isolation.”

The first challenge was the immediate pivot to Zoom.

“I am a people person. I draw energy from being with people,” said McBride, who is the first Black president in the 101-year history of the institution.  He is also openly gay.  “I am a person that likes to show up to things, sometimes even unannounced. That mode of being has really been challenged in all candor, by this transition to Zoom and being remote.”

As he was trying to get to know the campus, McBride was also grappling with the avalanche of financial challenges that confronted The New School in particular and higher education in general. It  was a “perfect storm,” and on his eighth day on the job, he had no other choice but to announce the first set of layoffs.

“There would be no best practices book that you’re going to read that would say, ‘On Day 8 of your presidency that is the level of thing that one is going to be asked to do,’” he said. “I thought candidly, I’d seen most everything you could see. And then this happened. There is no other way to describe the experience of planning through your transition for one kind of presidency that you think you’re entering, and then getting to the end of that transition and because of forces that none of us could have foreseen, having to pivot to a rather different kind of presidency, at least for the immediate future.”

He literally gave himself a week to mourn the loss of what he thought the presidential post would be “so that I could really began to embrace what it is, and how I’m going to need to be different for this moment,” he added.

And as McBride celebrates his one-year anniversary today—April 16th—his leadership during the early days of the pandemic has won him widespread recognition and praise, including from City & State which named him one of their top 50 influential higher education leaders back in September. It was an impressive public recognition for McBride, who on his first day on the job, made a personal pledge of $100,000 to the university’s  Student Emergency Assistance Program to help provide short-term financial support to students impacted by COVID-19.

“I think it’s important if you’re going to lead an institution, for you to make sure you’re doing everything you can to communicate to the institution that you’re all in,” he said. “This isn’t casual for me. I chose to be here. They chose me and I chose them. I am responsible for stewarding this institution to the next phase of its excellent work, and that’s serious. I wanted people to know I was all in here.”

It’s the ongoing fiscal challenges that his students face, that keeps McBride up at night.

Early into his presidency, the university announced that they would halt raising tuition. And working with his board of trustees, McBride helped to identify additional money for student financial aid.

Still, in doing so, he’s had to also keep a keen eye on other expenses.

Mentored by Dr. Cornel West and the late Toni Morrison during his days as an undergraduate at Princeton University, McBride quickly emerged as a tour de force in the classroom and a pioneer in writing about Black queer studies during his years as a faculty member.

But he learned early on as a department head that he had some aptitude for administrative work too, and within no time, he was hooked, later becoming a dean before settling in as provost at Emory. He said he wasn’t looking for a college presidency, but when The New School position came open, he was convinced that its uniqueness in the landscape of higher education, coupled with its New York City zip code, were factors that made him take a second look.

“It was the mix of those things that was powerful for me,” he said. “I thought, ‘that’s a place where I could and want to make a difference if I can.”

As a scholar in the classroom, McBride prided himself on diving deep into the material with his students, sometimes spending long periods of time on a specialized topic or text. But as president his attention “has to be very, very mobile” and he has to “know a little about of lot of things.”

Observers note that despite his short time at the institution, he has already brought great visibility to the school as its “chief storyteller and chief advocate.”  Earlier this year, he managed to lure Dr. Darrick Hamilton—one of the country’s leading economists who specializes in racial disparities—back to The New School. Hamilton, who served on the faculty for 15 years, was most recently at The Ohio State University, where he was thr executive director of the Kirwan Institute for the Study of Race and Ethnicity and a professor in the John Glenn College of Public Affairs with courtesy appointments in the departments of economics, sociology, and African and African American studies.

McBride has also helped to secure a $5 million grant from the Mellon Foundation to help diversify the ranks of the school’s junior faculty. After George Floyd was killed, McBride decided to close down the university for a day so that students, faculty and staff could grieve and reflect.

“We took a day as a university to breathe because we wanted to give ourselves the opportunity to both reflect on what happened,” and “to have the opportunity to do what was not afforded to George Floyd, and that is to take a breath and to be able to think, plan, to strategize because it’s really important to remember that the work of change is work that requires one to be rested.”

Encouraging his students and colleagues to be thoughtful and to practice self-care is part of McBride’s ongoing mantra. Burning out, he adds, “ultimately does not serve our purposes either.”

With a year under his belt, McBride is reimagining what The New School will look like on the other side of the pandemic.

“I’m hopeful about getting beyond the pandemic and creating a new normal because what we realized was that the old normal was not good for everyone,” he said. “In some ways we want the new normal to be a better version of ourselves.”

He wants his students to experience the joys of receiving a college education while remaining deeply passionate about the ongoing fight for social justice.

“I know from personal experience how absolutely life transforming [education] has been for me,” he said. “And that’s just real talk. It transformed my life in a way that I’m not sure anything else would have had the power to do, given where I was coming from, who I was, and the circumstances of my own birth.”

The Four E’s to Increasing Diversity of Course Materials