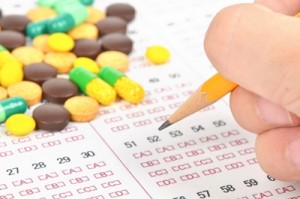 Should college students take smart drugs? That was the question posed to a panel of professors at an Intelligence Squared debate at George Washington University on Monday night.

Smart drugs, or “cognitive enhancers,” can help consumers be more alert, improve concentration, and retain information better. In other words, they can make learning easier and improve overall performance. Some of the more commonly used smart drugs are Ritalin, Adderall, and Modafinil, which are used to treat ADHD and narcolepsy.

College students have already cottoned on to the benefits and competitive advantage that smart drugs provide. A 2010 National Survey on Drug Use and Health found that 11 percent of 12- to 25-year-olds used prescription drugs for non-medical purposes. The study also found that college students were twice as likely to use Adderall than their counterparts who were not in college.

At the Intelligence Squared debate, Nicole Vincent, associate professor of philosophy, law and neuroscience at Georgia State University, and Eric Racine, director of the Neuroethics Research Institute at the IRCM, argued against smart drug use. Their opponents were Anjan Chatterjee, professor at the University of Pennsylvania, and Nita Farahany, professor at Duke University.

To illustrate how prevalent smart drug use is among college students and the general public, Farahany cited an online poll that found that 1 in 5 of respondents had used smart drugs for non-medical purposes. “We can pretend that this isn’t a choice that large swaths of people are already making,” she said. “Or we can embrace that smart drugs are just one of the many ways that people exercise free choices in their lives.” Farahany said that other polls reveal that 1 in 3 incoming freshmen use smart drugs.

Chatterjee said that smart drugs are not completely understood by the medical community but that some data indicate that the drugs do not work the same way for all people. “To the extent that there is data that some people actually improve with these medications, some studies suggest that people who are at the lower end of the distribution, with some of these abilities like working memory, actually improve more than people at the higher end of the spectrum,” Chatterjee said. In that sense, the drugs could potentially be used to level the playing field between intellectual abilities.

So if smart drugs are already relatively common among college students, giving takers an intellectual boost that debaters compared at various points in the evening to the steroids that pro-athletes use, caffeine, and SAT prep tests, what is holding people back?

Vincent made the case that drugs could reinforce some of our society’s more materialistic and workaholic tendencies. In theory, people would take drugs so they could work faster and smarter with the end goal of having more leisure time and better economic or professional opportunities. Vincent expressed doubt that a culture that tacitly encourages people to go to drug-enhanced lengths to achieve their professional or academic goals truly values “off” time spent with family and friends. Instead, taking smart drugs will only encourage people to work at an ever more furious pace, Vincent said.

“I’ve lived in six countries. People [in the United States] work so hard—harder than any other country I’ve lived in,” she said. “Do you really want to use smart drugs that are going to make you into even better-oiled machines that can be like gladiators—getting rid of all the time in your life and not be able to get all the things that make life worth living?”

Chatterjee said that it was not clear what sort of impact the drugs would have on society if they were available to all. “I think sometimes it is hard to predict how this resource question plays out,” he said. He noted that, when Ritalin first came out, the fear was that it would be used to “chemically straight-jacket” low-income children in school. Instead, Chatterjee said, today the drugs “are rampant in high-end, affluent schools and are not really used in lower socioeconomic schools.”

In terms of economic access to the smart drugs, Chatterjee said, they can be obtained “for the price that [one] might spend at a Starbucks for a latte.” At that price, smart drugs are “not expensive,” he said.

However, at least one audience member was not convinced that everyone has equal access to smart drugs. A George Washington University Ph.D. student commented, “Your response to the inequality question is that “It’s just the price of a latte.” But, when one in five children in the U.S. face hunger, not just poverty, but hunger, I think the expectation that “everyone can buy that” is a little pie in the sky.”

By the end of the debate, many in the audience were swayed to the side of smart drug proponents Chatterjee and Farahany. Intelligence Squared debates are inspired by traditional Oxford debates, with a twist. Audience members are allowed to vote on the issues throughout the event.