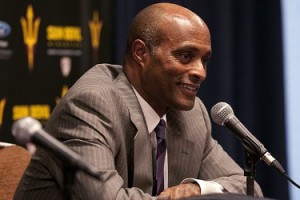 Arizona State University Athletics Director Ray Anderson supports student-athlete activism “where it’s for legitimate purposes and you’re not going to be manipulated for someone’s agenda that maybe is harmful.”

While no doubt the intercollegiate athletic landscape is more eclectic than ever before, athletic directors hope that student-athletes remain vital participants in school culture.

Several athletic directors at this week’s 2015 IMG Intercollegiate Athletics Forum presented by SportsBusiness Daily/Global/Journal said that they saw a threatened protest by the University of Missouri football team as an example of the positive power of sports. Players said they would not play an upcoming game in solidarity with a graduate student staging a hunger strike as part of campus protests over perceived lack of attention from administration regarding race issues on the campus.

“The real obligation is to make sure that there is communication in those situations where it’s for legitimate purposes and you’re not going to be manipulated for someone’s agenda that maybe is harmful and would take away credibility for any future attempts to use that kind of platform,” said Vice President for University Athletics and Athletics Director Ray Anderson of Arizona State University. “In this particular case, I was proud of University of Missouri student-athletes, coach and athletic director for taking a stand.”

“I love student activism, and I’m so glad to see student-athletes involved in student activism about issues unrelated specifically to athletics,” Vice President and Director of Athletics Jack Swarbrick of University of Notre Dame said. “We’re educators. I want our students who are athletes engaging in the same sort of activities, having the same sort of experiences as other students. Activism on campus is an important part of that.

“Culturally, it made me a little sad that the attention brought to those important issues was ratcheted up when athletes called attention to it. There were graduate students on campus, faculty, who were already engaged over a period of time in raising attention to that issue. I wish they had been able to get as much attention as happened when athletes stepped forward.”

Other issues discussed during the panel “Athletic Directors Perspective on Changes to NCAA Governance and the Price of Autonomy” included the changing governance of intercollegiate athletics and the increased power of conferences. Vice President and Director of Athletics Kevin White of Duke University said that, in James A. Michener’s 1976 book Sports in America, Michener predicted traditional athletic conferences would be replaced by consortia that negotiated large TV contracts, which has largely come true.

College sports are unquestionably a business and one which is constantly evolving. The athletic directors agreed that the role of the NCAA going forward is a work in progress.

Health and wellness of players continues to be an issue. The upcoming movie Concussion was mentioned, and Anderson said that the NCAA and individual institutions need to work together to learn more about concussions in all sports and the long-term impact.

Swarbrick said that, since the institutions at which college sports are played have some of the best scientists in the world as well as affiliated medical schools, it behooves them to look for answers about the health and wellness of student-athletes.

With conference realignments — which the athletic directors agreed would likely happen again in the future — and changes to football and basketball, concern continues for Olympic sports. White said that the answer to keeping these sports vital requires a change in the national narrative as to how important sports like track and field and swimming are. Anderson said Arizona State continues to add sports because they feel the athletic department engages in leadership development and that cannot stop.

Swarbrick said that, years ago, the late Dr. Myles Brand, president of the NCAA, told him that self-sustaining financial performance as an important criterion for evaluating athletic programs was not good. It’s not done in other aspects of the university.

“We are part of the educational institution,” said Director of Intercollegiate Athletics and Associate Vice President Shane Lyons of West Virginia University. “We want to build a comprehensive athletics program that entails all of the sports.”

Moderator Mike Alden, recently retired athletic director at the University of Missouri, said he’s not sure where the idea of being a self-sustaining athletic program originated. He asked the panelists whether an institution should be investing resources or an athletic department should stand on its own.

White said he found that the model of self-sustaining almost pejorative. There are a lot of places on campus that don’t generate cash flow. Some courses are much more in demand than others, and the same goes in sports. It mirrors the academy because it’s part of the academy and with that perspective intercollegiate athletics reaches maximum potential.