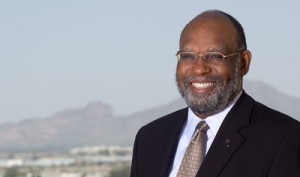 Rufus Glasper, who has been a part of the Maricopa Community Colleges community for nearly 30 years, announced that he would retire on December 2. He currently serves as chancellor, a position he has held for the past 13 years. Upon his retirement, which is scheduled for late February, he will move over to the Arizona-based League for Innovations, where he will take on leadership as CEO and president of the organization.

During his tenure as chancellor, Glasper bore witness to the gradual decline of state funding to the community college district to zero as of July of this year. During this period, the Maricopa Community Colleges district, which is made up of 10 colleges and is one of the largest such institutions in the country, maintained its financial integrity while also formalizing a transfer pathway to Arizona State University. Credits at Maricopa can count toward credits at ASU, allowing students to work toward a bachelor’s degree at a fraction of the cost of four years at the state school.

Although it might not be obvious from an outside perspective, Glasper said that the state divestment had come at a “cost” to the community college district. “The cost was [that] our full-time to part-time ratio for faculty and staff had to change. We had to increase the number of part-time employees,” he said, later adding, “You can do that, but only for a short period of time. In the long run, you are going to impact quality.” In recent years, the district has made moves to partner with corporations.

Currently the district derives a significant amount of its funding from property taxes and tuition. Glasper said he would advocate for continuing to raise both in order to meet the college’s financial needs. “Sooner or later inflation will continue to rise and we will have to make choices,” he cautioned. He noted that he did not ask the governing board to raise taxes or tuition for the 2015-16 budget because four of the newly elected board members ran on a platform against both proposals.

“We proposed [a budget] consistent with their wishes … with the hopes of working with our board members to educate them on the merits of our system and the needs for resources moving forward,” Glasper said. “We believe that we have been able to educate them and we will see what the fruits of those efforts will be in early January when we make a recommendation for a tuition increase and then a subsequent property tax increase.”

Glasper will stay at the helm through the January legislative session in order to shepherd his vision for Maricopa Community Colleges into the coming year. If the board members continue to oppose tuition and tax increases, Glasper said, “We will have to become more lean and more mean and more effective and more efficient and downsize our system.”

Gerardo de los Santos, the outgoing League president who is resigning due to family issues, said that the League will benefit from Glasper’s years of expertise. “There are a lot of exciting initiatives and activities on the forefront for the League and Dr. Glasper will really be able to provide excellent and seamless leadership,” he said. Glasper is a longstanding board member of the League.