Frontier Goes the Distance in Serving the Underserved - Higher Education

Frontier Goes the Distance in Serving the Underserved 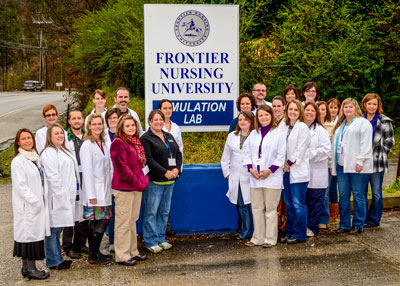 Mary Breckinridge was born into high society in the late 1880s. Her father was a congressman and ambassador to Russia; her grandfather a vice president. She grew up in cosmopolitan circles, educated by private tutors in Washington, D.C., and St. Petersburg, Russia. That she would become a champion of improving health care for Americans living in rural poverty is not an intuitive leap of logic.

It was personal tragedy that brought Breckinridge to that path. Her background did not insulate her from the dangers of childbirth and early childhood illness so prevalent at the time. After marrying for the second time in 1912, Breckenridge moved to rural Arkansas with her husband, where she gave birth to two children, both of whom passed away before they turned 5 years of age.

The tragically early deaths of her children helped fuel Breckenridge’s resolve to improve health conditions for women living in parts of the country cut off from easy access to hospitals and doctors. Prior to her marriage, she trained as a nurse, but, after her children died and the breakup of her marriage, she traveled to France and England, training in nurse midwifery in England. She returned to rural Kentucky to found Frontier Nursing Service in 1925.

In its early days, FNS was organized as a group of rural health care outposts manned by nurse-midwives. At the time, no nurse midwifery courses were available in the United States, so women had to go to England for their education, as Breckinridge had done. With the advent of World War II, sending women overseas became much less practical. Thus, in 1939, Breckinridge opened her own nurse-midwifery school, which today is known as Frontier Nursing University, 77 years later.

Since its beginnings, the nursing service had a strong emphasis on serving the underserved, famously sending its nurses out on horseback to remote settlements in the mountainous areas of Leslie and Clay counties in Kentucky. Midwives ventured to such picturesquely named hamlets as Confluence, Cutshin and Hell-for-Certain.

For decades, Frontier focused its efforts in Kentucky, but the social context inevitably changed. With a declining birthrate in the 1960s, Frontier nurses’ services were less vital to the region. In the 1980s, Frontier changed its academic model to distance learning. With the advent of online learning, Frontier jumped on board.

Although nurses on horseback have not been a part of the equation since the 1960s, Frontier hews to its rural focus, albeit one that is now dispersed across the country. The school, which offers degrees and certificates in nursing and midwifery, educates a student population that is primarily female and primarily from rural areas. The objective is to allow students to remain in their home communities while working toward a degree, according to Frontier representatives.

“Not every student is going to be attracted to Frontier because we do have that sense of mission,” Dawn Lovelace said. Lovelace is a certified nurse midwife and family nurse practitioner as well as a member of the Frontier faculty who has lived in rural Washington state for 21 years. Her community, she notes, is so remote that it is 50 miles from the closest Walmart, fast food joint, or stoplight, for that matter.

Lovelace said she arrived in the area 21 years ago with a mandate to start a maternity services clinic in the area, since the closest providers were 50 to 100 miles away. Due to the distance and expense of taking time off work and traveling, too many women were going without adequate prenatal or postnatal care.

While the medical field has made astonishing advances since Frontier Nursing Services was founded in the 1920s, some rural areas of the country still face health disparities exacerbated by social conditions, like poverty or a lack of access to care. One Harvard School of Public Health study from 2008 on life expectancy rates show troubling trends in rural areas, particularly the Deep South and parts of Appalachia.

Life expectancy, which is used as a general measure of health, has been on a slow progression upward since World War II. An infant born in 2015 can be expected to live to the ripe old age of 78 years and nine months, according to the Centers for Disease Control and Prevention. However, the 2008 Harvard study showed a divergence in outcomes between wealthy and less wealthy counties. In some counties, life expectancy has actually declined, the study found, attributing the causes to diabetes, obesity and cardiovascular disease.

Tonya Nicholson, associate dean of midwifery and women’s health at Frontier, said that it is important to remember that just because an area is designated as “rural” does not mean that is by necessity underserved. “Rural areas may or may not be underserved, and an underserved area may occur in an urban area,” she said.

Nevertheless, rural areas have different types of challenges in terms of providing care to the whole community. Practitioners like Lovelace bear witness to them on a near daily basis.

“For the most part patients in rural areas tend to be a bit older. They tend to be sicker because they tend to wait longer to go in and they tend to be more independent. You have to have a certain mindset to live way out where we are,” Lovelace said. “So they’re a lot less likely to go in early for health issues. By the time they go in, things tend to be worse than they would be for somebody who lives in an urban area and their doc lives maybe two miles down the road.”

Living in a rural area with a small population does not equate to a smaller case load, Lovelace said. Health care practitioners in her rural part of Washington “wear a lot more hats” and are in high demand. “I have a much wider scope of practice than a nurse practitioner might have in an urban area where there are more providers,” she said.

Erin Tenney is a Frontier graduate and recently became a part-time faculty member. Without Frontier’s online coursework, Tenney said it would have been much more difficult to be certified. “Frontier was the way I could finish my education from home because it is a four and a half hour drive to the nearest university offering a degree in certified nurse midwifery from here,” she said.

Tenney lives and works in rural Wisconsin, where she also sees how vital small clinics and critical access hospitals are for the overall health of the community. “I think it’s vitally important that this community-based approach to health care does not get lost in the current day,” Tenney said. “I think that’s really where the care piece happens: in the community and in the home. Rural communities are very different than urban communities, and each has very important historical, cultural, family based-beliefs and practices that are absolutely essential to health.”

Changing the Face of American Medicine