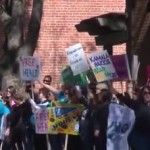 Turn on your television to any local station during daytime hours, and you’re sure to see a handful of commercials touting the amazing benefits of enrolling in for-profit colleges. These idyllic spots highlight flexible classes, accelerated programs, online classes available from the comfort of home, and more. Usually the information about the particular college is delivered by a once-uneducated person turned career success ― often a working dad, or single mom, whose kids are clearly proud of what the parent has accomplished. Obtaining a college education, particularly from the school mentioned, looks so easy to do.

While the description above may seem like the stuff of marketing clichés, it’s a tactic that has worked for many for-profit colleges. Targeting minorities and other non-traditional college students through commercials like these has been the bread-and-butter of for-profit schools for at least the past two decades and those tactics are just now starting to see some legal pushback.

To be clear, not all for-profit colleges are created equal. There are some that boast high graduation rates and seem to have student success at the heart of their endeavors. The very fact that these colleges exist have actually progressed the entire university system in the U.S. by pushing innovative programs, like online degrees, and showing that there truly is a large market for non-traditional college students.

Let’s not kid ourselves though. The non-profit college push is a very thinly-veiled attempt to enroll a volatile market – often the most eligible for federal loan and grant assistance.

The financial facts speak for themselves:

Which leads to the unavoidable question: Have non-profit colleges preyed upon at-risk students for the sake of making a quick buck?

All the right words

One of the reasons for-profit schools have seen such a surge in enrollment in the past two decades can really be pinned on the smart marketing of two words: flexibility and acceleration. For students who simply did not have the funds, nor desire to incur college debt, right after high school, for-profit schools have stepped up as a second chance, of sorts. These colleges are places where non-traditional students can continue to work and take flexible courses, many or all of which are online. Most for-profit schools also offer a faster route to degree attainment, which peaks the interest of students who don’t want to dedicate years of their lives to college aspirations but are looking for a way to advance their careers. The University of Phoenix, perhaps the most recognizable name in for-profit online colleges, recently announced a new initiative to count other course work and work experience towards degree attainment. This initiative, and others like it, are designed to recruit students who don’t want to start from square one and don’t have the time to commit to a traditional college experience.

So what is wrong with either of these options? Nothing, in theory. Flexibility and accelerated degrees are a good fit for many students who otherwise could not chase any sort of college degree. Where many non-profits fail their students, however, is in charging astronomical rates and not offering enough support to keep students enrolled until graduation. In essence, these schools market well enough to get the students enrolled in courses but don’t do enough to guide them to their degrees. All the flexibility in the world can’t help a student understand a difficult concept, or learn better time/study management skills. Accelerated programs without mentorship options run the risk of burning students out, especially if they have no inspiration or focus.

It’s clear that the recent outcry for accountability for non-profit colleges is long overdue. Students deserve better than what they’ve been served by these institutions, and quite frankly, so does the entire American population. It’s time for these schools to deliver on their promise of career success for those who enroll – and that starts with student support that extends beyond recruitment.

Being Intentional About Defining “College Life”