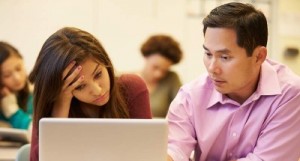 National Harbor, Maryland — As more students with challenging economic circumstances pursue higher education, colleges and universities must abandon the notion that they can go at it alone and still serve their students well.

That was one of the key pieces of advice that a university president shared at the Association of Governing Boards’ national conference Monday during a panel on how to balance the need to increase completion rates and maintain quality. The event drew more than 1,100 individuals.

“I say this because one of the things that’s hard for higher ed—but we had to learn at Trinity and every institution must learn—is how do you build common cause and partnership with K-12 and other organizations that are building the bridge to college?” said Patricia A. McGuire, president at Trinity Washington University. “We colleges cannot do this alone. We have to be humble enough to say that we need help.”

“The key for us at Trinity was partnerships,” said McGuire, rattling off the names of several organizations—from the DC College Access Program to dream.us—that she said her institution collaborates with to help students with high academic and financial needs make it to and through college.

McGuire said colleges must also discard old ideas about who are their students. She said many at her institution are already emancipated and cannot rely on their parents for support.

For that reason, she said, her university offers students subway and bus passes to get to school and a food pantry to make sure they don’t go hungry. Eighty-five percent of the student body is Pell Grant-eligible, she said.

McGuire said it’s also important to diversify faculty in order to relate better to students. She spoke of how she incentivized older faculty to take an “early retirement” because too many were unwilling to change the way they taught and harbored doubts about students’ ability to learn.

“Ten years ago my science faculty thought they (students) couldn’t do science,” McGuire said. “We changed the faculty, and now we have students winning awards. Our board just built a $40 million science building.”

Sarita Brown, president of Excelencia in Education, a nonprofit research and policy organization that focuses on educational issues for Latinos, said most students are navigating their way through college while having to work.

Institutions, therefore, need to think about things such as providing child care and other services and “whether or not your campus will be a frontrunner” in taking action on such things.

“That’s where the relationship between board members and leadership will be essential,” Brown said. “The judgment call is who are you pursuing as a student body, what’s your social contract to the students you admit?”

John A Pérez, regent at the University of California Board of Regents, said higher education officials must be conscious about what kind of biases they may have when they seek to serve students from minority groups or of lesser economic means.

“We have to be mindful of how we assign value judgments now that we’re dealing with different students than in the past,” Pérez said, citing research that shows when certain demographic information is redacted from applications, students from underrepresented groups fared better in terms of getting internships, admitted to graduate school and the like.

Several speakers spoke of how the so-called “completion agenda” has brought different biases toward students of today, whereas students who went to college under the GI Bill after World War II but didn’t complete or mothers who stopped out of college to care for their families and returned later were not thought of as “dropouts” like students are now.

“Having faculty engage with students in and out of the classroom is the number one factor for success,” Thompson said, asking trustees to consider whether they track such things.

Thompson also warned against adopting a particular program and thinking it will solve a given problem on campus.

“The question should be asked: Are we implementing them with fidelity?” Thompson said.