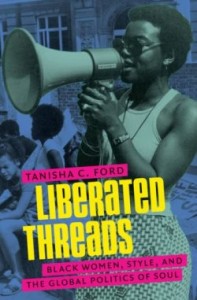 A rising star in academia, Ford has been lauded by scholars such as Dr. Tiffany Gill of the University of Delaware for writing a compelling book that offers a “rare and much-needed window into the activism and experiences of Black women in the United States and abroad.”

Liberated Threads provides a chronology of how “soul” expressed by Black women in the form of dress and fashion was neatly aligned with their work as activists.

“I want people to be able to have a language to talk about why Black culture is globally popular,” said Ford in an interview with Diverse. “Why is this the case? How did it happen and why?”

The book, which grew out of her doctoral dissertation, was inspired by her parents — particularly her mother — who enrolled at Indiana University as a college student during the 1970s when the Black Power movement was at its height in the United States.

As Ford notes in the fourth chapter of her text, which focuses on the soulful styles of Black college students, African-American women — like her mother — were using their hairstyles and their dress as political statements even as they were staging sit-ins at the president’s office or protesting White fraternities and sororities that engaged in discriminatory practices.

“The clothing was instrumental in saying, ‘Hey, I’m here on this campus,’” says Ford, who also earned her undergraduate and graduate degree from Indiana University. “[The women] would decorate their dorm rooms in a way that says, ‘I’m proud of my African heritage.’”

During this time, the world was taking note of the fashion statements in the United States. The Black diaspora throughout the world, including in London and on the African continent, began to employ dress not just as a marker of style, but as a symbol of defiance and resistance — something that was was part and parcel of Black organizing, said Ford.

“Internationalization is really important,” she said, adding that dress became a powerful political symbol even as Black culture was circulating throughout the world along political lines of freedom.

“The adorned body was very much a part of our activist strategy,” said Ford, who noted in an earlier chapter of the book that Black women, for example, boycotted a Harlem beauty shop in an effort to reject European beauty, while exposing White economic encroachment in a largely Black neighborhood. “I try to make the case that the Black community has always been invested in an embodied form of activism.”

Throughout the book, Ford explores how Black bodies have been historically perceived as they’ve moved throughout the world. Yet she also examines the corporate thread of how Black culture has been co-opted by corporate interests.

“There have always been these entanglements with corporations. But what are the long-term implications of commodification that’s not just about seeing or appropriating a set of Black identity politics, but about the very reality of space that Black people are moving about?” Ford asked. “It’s not just about the co-option of identity politics because Black people, in my opinion, lead the cultural charge. But what do we do about the labor and environmental issues? That’s where the field needs to go.”

“I want readers to understand that dress matters, both in a historical context and a contemporary context; that we are a social body and our bodies are read by people, and even more so if we are part of a marginalized group,” she said. “You can get killed based on what you’re wearing and not that that should deter us from what we wear, but to know that Black creativity within our dress has always been seen as a threat to the state.”

Ford said that her book pays homage to Black women who were political actors and agenda setters in their fight to redefine America and the larger world.

“I want people to know that Black women’s history matters,” she said. “It was important for me to highlight those voices.”