Even before Milwaukee erupted into violence this weekend over a police shooting—and prompted Republican Gov. 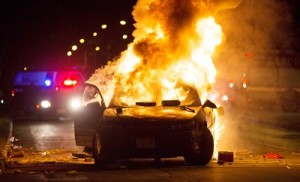 A car burns as a crowd of more than 100 people gathers following the fatal shooting of a man in Milwaukee, Saturday, Aug. 13, 2016 (Calvin Mattheis/Milwaukee Journal-Sentinel via AP).

For instance, during the riots that took place in Ferguson, Missouri in the wake of the 2014 police shooting of 18-year-old Michael Brown, Milwaukee councilwoman Milele Coggs ominously warned that her city was “just a death or two away from being Ferguson.”

“This is one time I wish I was wrong,” Coggs wrote on her Instagram account Sunday after fires engulfed half a dozen businesses in the area surrounding the shooting scene in the city’s Sherman Park neighborhood.

“The ashes from the hurt, pain & frustration that are an outgrowth from years of abject poverty, inequities, segregation & racism can’t be swept away,” Coggs continued. “They forever stain the foundation of this city & will continue to if ignoring them is the strategy that is pursued.”

Coggs is by no means alone.

From local rap artists such as Gat Turner—whose song “The Fire This Time” includes a lyric that says Picture Killwaukee up in flames! — to a writer who said two years ago that Milwaukee “may out-Ferguson Ferguson,” there is no shortage of individuals—including some in academe—who felt the unrest in Milwaukee was just a matter of time.

“I’m entirely unsurprised that this has occurred,” Sara Goldrick-Rab, a Temple University sociologist who spent several years in Milwaukee researching her book—Paying the Price: College Costs, Financial Aid, and the Betrayal of the American Dream—told Diverse via Twitter.

Chapter 8 of her book, which is due out in late September, focuses on Milwaukee and is titled “City of Broken Dreams.”

“This is an intensely segregated and impoverished city where many Black folks don’t feel safe traversing from one part of the city to another, even to attend college,” Goldrick-Rab said. “I’ve been doing research in Milwaukee since 2008 and the themes of feeling trapped, hopeless, scared—and feeling that ‘things will inevitably erupt’—come up over and over when speaking to people between 18 to 30.”

Milwaukee is not only highly segregated—the wealth disparities between its Black and White families are among the widest in the nation, according to the Brookings Institution. Whereas the average family income for White families in the city stood at just under $100,000 in 2014, for Black families, it was just over $20,000, according to Brookings.

This is not Milwaukee’s first experience with riots. The city is one of dozens that erupted into deadly violence in the summer of 1967 due to racial tensions at the time.

Milwaukee also has a long and ugly history with police killings of Black men.

One of the most notorious is the 1958 police shooting of Daniel Bell, a 22-year-old Black motorist who fled police after a traffic stop.

A Milwaukee police officer shot Bell in the back of the neck “at close range, then planted a knife in his right hand as he lay in the snow, not knowing he was left-handed,” according to one published account.

While the officers involved in his death were initially cleared of wrongdoing, more than two decades later, one of the officers came forth and told the truth about his partner, who admitted planting the knife and ultimately pleaded guilty to reckless homicide and perjury, according to the account.

Bell’s family was subsequently awarded $1.6 million in 1981 for his death.

Every decade since has seen high-profile police shootings or police-custody deaths of Black men in Milwaukee.

One of the most inflammatory recent cases is that of 22-year-old Derek Williams, a robbery suspect who died in 2011 in the back of a police squad car. A video shows a handcuffed Williams pleading and gasping for air while an officer cavalierly accuses Williams of “playing games.”

Although the officer in the Williams death was fired just last month, the family has sued the city, and a sense of injustice continues to linger over the case and a string of others too numerous to mention.

The latest shooting involves 23-year-old Sylville Smith, man that police say fled a traffic stop while armed and refused to drop his weapon.

Milwaukee Mayor Tom Barrett said a still photograph from a body camera video, which is not being released pending a state investigation, clearly shows the slain man had a gun in his hand at the time of his death. An investigation revealed the man had 23 rounds in his gun.

Barrett said the violence in Milwaukee was “unlike anything I have seen in my adult life in this city and I hope I never see it again.”

Goldrick-Rab, the Temple professor, said Milwaukee shares several characteristics in common with other cities where unrest over police killings has taken place, such as Baltimore.

“Of course some of these same characteristics shape other cities where Black Lives Matter has taken off,” Goldrick-Rab said of the movement that came about in 2013 after the shooting of Trayvon Martin. “But the intensity of the challenges is worse in Milwaukee.”

“A year at UW-Milwaukee costs a low-income person more than a year at UW-Madison due to state underfunding,” Goldrick-Rab Tweeted.

“While a case might be made that flagship institutions, like the University of Wisconsin-Madison, might require additional funding to maintain its core functions … the opposite case could be made for institutions such as the University of Wisconsin-Milwaukee, which serves a greater share of first-time college students and students from less-advantaged academic background that, arguably, may require more intensive academic supports and services to complete college,” Goldrick-Rab wrote in a 2015 report from the Wisconsin Hope Lab, a research lab she founded when she was a professor at UW-Madison.

Jamaal Abdul-Alim, a senior staff writer at Diverse, grew up in Milwaukee’s Sherman Park neighborhood near the epicenter of the violence that engulfed the city over the weekend. He is a graduate of the University of Wisconsin — Milwaukee, and a former crime reporter for the Milwaukee Journal Sentinel. He can be reached at dcwriter360@yahoo.com or you can follow him on Twitter @dcwriter360.