Without question, this country is in unchartered territory. People across the country continue to express themselves in despair. Others in fear. Some panic, while still others prepare. Of course, many have staged numerous protests from coast to coast. 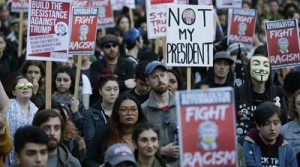 In response to the aftermath of the elections, some 150 college and university presidents have banded together to express their concern regarding the rise in hate crimes across the country. The unexpected presidential results have emboldened racial supremacists and misogynists across the country, including on the campuses of colleges and universities nationwide.

At the same time, professors from coast to coast are also speaking out, including via the American Association of University Professors (AAUP), who have denounced the racial incidents and hate crimes which are happening not just at colleges and universities, but also at K-12 schools. They have also come out in support of the idea of sanctuary campuses for undocumented students.

While a colleague, Angela Valenzuela at the University of Texas at Austin, speaks of watching a documentary on the rise of Hitler and its striking similarities with today’s political situation, hundreds of Jewish scholars of Holocaust history call on Americans to mobilize in global solidarity against the president-elect.

This also includes a call by some 200 national human rights organizations that are calling upon President Obama to dismantle whatever is left of the National Security exit-entry registration system (NSEERS), which during the President George W. Bush Administration, was used to track Arabs and Muslims in this country, yet resulted in zero terrorism convictions. The denunciation of this program  has also come from the Council on Arab Islamic Relations (CAIR). The architect of NSEERS, Kris Kobach, appears to also be on track to have a prominent role in the president-elect’s cabinet. He purportedly is proposing something similar, though not limited to Arabs or Muslims, thus prompting that joint call. Kobach, not coincidentally, was the architect of Arizona’s anti-immigrant SB 1070 legislation, a state measure that was copied by many states across the country.

This is but two weeks after the elections and yet all the signs are ominous, beginning with the selection of Steve Bannon, a racial extremist who previously led Breitbart News, as chief strategist and senior counselor to the president-elect. As he continues to choose the rest of his cabinet, all the signs point towards extreme right-wing consolidation, including the likes of Maricopa County Sheriff Joe Arpaio and ex-Arizona governor, Jan Brewer.

All this has been taking place while the inhumane, brutal and unprecedented assaults against the water protectors at Standing Rock continue to shock the world’s conscience. Despite the president ordering the halting of the construction of the Dakota Access Pipeline, which is slated to traverse through four states, he has done little in the past several months to both stop its building, nor has he stopped the violence against the water protectors. And prospects do not look good regarding this issue, as the president-elect is a strong supporter of oil drilling and energy deregulation.

Amid this chaos, those from communities most at risk, the undocumented, including DREAMERS, continue to prepare for the worst, yet their leadership remains undaunted. In fact they continue unafraid. This includes a Caravan of Courage and march from New York to Washington DC (Nov 22-24), led by the national Dream Action Coalition. Throughout the country, walkouts, in support of K-12 DREAMERS have also taken place, especially in cities such as Los Angeles.

Come Inauguration Day, January 20, 2017, when we can expect not simply massive protests in Washington, D.C., but nationwide, also to be expected will be more student walkouts at colleges and universities and K-12 schools throughout the country. The question of course will be, what will happen the next day? Actually, a nationwide protest by women will also converge on the capitol on Jan 21.

Without question January 20-21 will most likely amount to an unprecedented national general strike. But again, what will happen the following day? Not being a soothsayer, it is not certain anyone can predict what happens thereafter. However, what can be predicted is that some sectors of society will withhold recognition of the incoming administration.

Many will express the sentiment that if the administration treats certain sectors of society as less than human, then this administration will forever be seen as immoral and illegitimate. It appears that the only certainty that we can count on is uncertainty, and that is not necessarily in regards to the incoming administration because the president-elect appears to be doing precisely what he promised. The uncertainty is how those that have been targeted will continue to react.

Not to be forgotten is that the president’s challenger has reportedly won the popular vote by 1.7 million thus far and the gap may reach 2 million.

Governance in this environment is again, uncharted territory.

Being a Tourist is Not the Same as Being a Minority

NCAA Tournament Important to Recruiting — But Not Likely to Rutgers

Here’s Hoping That the Current Racial Climate Will Improve