If you ask what the recent appointment of Betsy DeVos as U.S. Secretary of Education means for higher education, a common refrain — even among education policy and advocacy leaders — is that it’s too early to say.

“Given DeVos’ sparse record on postsecondary issues, we don’t know many specifics about what her appointment holds for issues such as access and diversity in higher ed,” said Dr. Michelle Asha Cooper, president of the Institute for Higher Education Policy, of Washington, D.C. 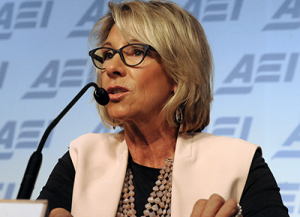 “We’re all reading the tea leaves and it’s just much too early to tell,” agreed Terry Hartle, senior vice president for government and public affairs at the American Council on Education, which represents the nation’s colleges and universities.

But not everyone is convinced that it’s too early to figure out where DeVos — 58, a staunch school-choice advocate, four-time chairwoman of the Michigan Republican Party, investment firm chairwoman and wife of billionaire entrepreneur and Amway heir Dick DeVos — is headed once she takes the helm at the U.S. Department of Education.

Dr. Kevin Kumashiro, dean of the School of Education at the University of San Francisco, says that, despite the fact that many claim “we know very little about what DeVos has done in the field of higher education, or what to expect,” there are enough clues to suggest otherwise.

“I believe there’s much we can say about her track record on issues of diversity, particularly the causes that she has financially supported and the organizations for which she has served on boards,” Kumashiro told Diverse.

“For instance, she chairs the Philanthropy Roundtable, a cornerstone of the conservative movement,” Kumashiro noted.

“She headed efforts to ban same-sex marriage in Michigan and elsewhere; she funded and served on the board of the Acton Institute, which recently blogged in favor of ‘loosening’ child labor laws; and she funded and chairs the American Federation for Children, which works closely with the American Legislative Exchange Council, well-known for its influential role in drafting model legislation that both advances corporate interests and rolls back gains of the civil rights movement.

“We need an education secretary who advocates for those on the margins, not for the 1 percent, and given the role that education can and should play in strengthening democracy, her track record on issues of diversity should raise alarms,” Kumashiro said.

Pedro Noguera, a distinguished professor of education at UCLA, says DeVos’ selection as education secretary is “consistent with who Trump is.”

“He picked another billionaire, another very conservative, right-wing person,” Noguera said. “And that’s what I think DeVos represents.”

“She’s left schools in Detroit in shambles,” Noguera said, lamenting that DeVos pushed for no regulations on charter schools and left a legacy of “many cases of children being put in inadequate facilities.”

“The lack of oversight, any kind of accountability, is a huge problem and that seems to be the direction that she wants to take education on a national level,” Noguera said.

Gary Orfield, a professor of education, law and political science and co-director of The Civil Rights Project at UCLA, expressed similar concerns.

“She’s been a great advocate of privatization, not only of charter schools but charter schools run by private businesses, and they really have not worked in her own state, where she has been extremely actively involved,” Orfield said, echoing concerns raised in a recent article by The New York Times.

Cooper, the IHEP president, voiced worry that DeVos might work to relax oversight of the for-profit college sector.

“DeVos has been affiliated with groups that have sought to ease regulation of for-profit colleges around the country, despite the research that shows students at these institutions suffer a disproportionate level of student debt,” Cooper said.

She clarified that she was referring to the American Federation for Children, which has ties to the American Legislative Exchange Council’s Education Task Force that has advocated on behalf of the for-profit college sector.

“Given the national focus on college affordability and bipartisan interest in easing student debt, the GOP could come to regret appointing a secretary likely to be in favor of easing regulations on these institutions,” Cooper said of for-profit colleges. “There is clear frustration in the American public that education costs have skyrocketed out of control and interest in making college affordable for all students, which entails, but is not limited to, holding institutions accountable to their students and communities.”

Orfield expressed worry that the Trump administration could go too far the other way and seek to hold all institutions of higher education accountable for student outcomes, not just the for-profits.

“In a world where students of color come from high schools that are inferior, less-prepared for college, take longer to graduate and families don’t have the money to help them and students are often in deep financial problems and they face a difficult job market after they graduate, if you just compare colleges and hold them accountable for the outcomes, you’d be punishing colleges that serve disadvantaged kids,” Orfield said. “That’s not what you want to do if you want to expand opportunities in our society. That’s my worry.”

Dr. Aaron Pallas, a professor of sociology and education at Columbia University, also said DeVos’ history of pushing to relax oversight of charter schools in Michigan raises red flags for what she might do in the realm of higher education.

“In Michigan, she was the architect of the expansion of the charter sector in Michigan, where 85 percent of charter schools are operated by for-profit entities, and there’s very little results,” Pallas said. “That’s one of the reasons why the charter sector in Michigan hasn’t been successful in educating kids. Other states have stronger mechanisms for holding charter schools accountable and Michigan has little oversight.

“If that kind of logic were transposed to the postsecondary sector, we might see less regulation of the for-profit sector, which the Obama administration was moving toward shutting down predatory for-profits and restricting their capacity to basically gouge students who are paying for degrees that were virtually worthless,” Pallas said.

Not everyone is a public critic of DeVos.

Dr. Howard Fuller, distinguished professor of education and founding director of the Institute for the Transformation of Learning at Marquette University, said he has known DeVos for the past 15 or so years, and that if he had any issues with her, he would tell her directly. He disclosed that DeVos supported the Black Alliance for Educational Options, a national group that Fuller founded and that advocates for parental choice.

Fuller said he has also served on the board of an organization that was the predecessor to DeVos’ American Federation for Children.

“Here’s what I know about Betsy,” Fuller said during a brief phone interview with Diverse. “I know she cares about the children that I care about. She supports parental choice.

“Beyond that, I don’t know what Betsy will propose and obviously I have no idea what Trump will propose.”

Diverse reached out to DeVos via her website — BetsyDevos.com — but did not get a response.

One of the most insightful interviews DeVos has given was during a Q&A with the Philanthropy Roundtable, an organization for which she serves as a board member.

“I’m most focused on educational choice,” DeVos said in the Q&A. “But, thinking more broadly, what we are trying to do is tear down the mindset that assigns students to a school based solely on the ZIP code of their family’s home. We advocate instead for as much freedom as possible.”

Peter McPherson, president of the Association of Public and Land-grant Universities, said he does not share the view of critics who accuse DeVos of wanting lax oversight for schools.

“On the issue of accountability, my impression has been the opposite,” said McPherson, who had dealings with the DeVos family when he served as president of Michigan State University from 1993 to 2004.

“She has expressed strong support for accountability outcomes,” McPherson said. “I assume as she gets into higher education issues that she will carry that same philosophy.”

U. of Wisconsin Leaders Reject Governor’s Proposal to Rank Campuses