While some major players like the University of California and the California State University system have led the way in the call for sanctuary campuses for undocumented students, others appear to be stopping far short.

Call it the hedge in the heartland. The gutless heartland.

Schools like the University of Illinois and Northwestern University are willing to say they will support the undocumented students they have.

But to use the word “sanctuary”?

They just can’t or won’t do it. 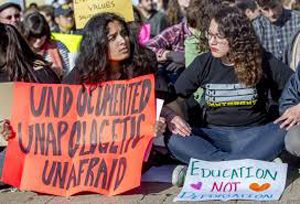 “We cannot declare our campuses as sanctuaries, as the concept is not well specified and may actually jeopardize our institution,” said a letter to the University of Illinois, signed by the President Timothy Killeen, and the leaders of the three campus university. “However, we will continue to do everything we can within the law to reassure, support and protect our students.”

“Within the law” is a phrase you didn’t hear activists like Martin Luther King Jr. say.

But an act of civil disobedience in the name of what’s right and just isn’t a call the U of I wants to make. The school simply doesn’t want to be the hero.

School officials said it would make sure the confidentiality and privacy of any student’s confidential information is protected, according to a report in the Chicago Tribune. And the school would support legislation to allow public universities in the state to use public money for financial aid.

But a real commitment to protecting students from being deported?

“We’ve got our own way of stressing who we are and what we do. I think sometimes the semantics can have pitfalls that we’d like to avoid if we can,’” Killeen said in an interview to the Tribune.

But this isn’t just semantics.

Undocumented students around the country in campuses are scared about their future. President-elect Trump has already said he’d deport 3,000 undocumented criminals. The estimated 750,000 undocumented students who have signed up for the Deferred Actions for Childhood Arrivals program could easily be next on the list. Brought on by President Obama’s executive order, the new president can eliminate it with a signature on his first day on the job.

The fear is real. Students are looking for reassurance.

Any school troubled by the word “sanctuary” isn’t going to protect undocumented Dreamers to the degree they need.

This is a time for higher ed officials to step up and show they’re part of a different kind of institution. Higher ed should represent and advocate for society’s loftier ideas and values. And from that position, it should leverage its power as a thought leader.

But in other places, cowering for fear of political reprisals and/or funding cuts appears to be quite normal.

For the University of Illinois president to call it a matter of semantics is just wrong.

The moral obligation a university has toward its earnest, hardworking students — documented or undocumented — is more than just words.

Expressing that obligation by using the word “sanctuary” says it all. It’s an important and powerful word. It gives undocumented students real hope for the dreams they seek.

A university fearful of using the word only shows how gutless and heartless it really is, and leaves its students more worried than ever.

For the undocumented student in Illinois, the University of Illinois is not for you.

Emil Guillermo is a veteran journalist and commentator, who writes for AALDEF, the civil rights organization, at http://www.aaldef.org/blog.