The New York Times’ front page treatment of a college sexual assault case once again shines a spotlight on what has become the biggest higher ed issue of our times.

It’s the inability of schools to dispense a real sense of justice in what should be criminal matters. 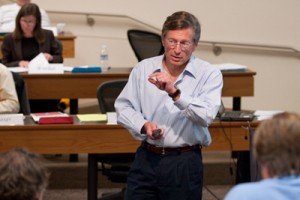 Last Friday, the Times reported that an unidentified Stanford football player was still on the roster for his team’s Sun Bowl appearance that day against North Carolina. His status had gone unchanged even though the player had been before the college’s disciplinary board twice since 2015 and both times was found by a 3-2 vote to have committed a sexual assault.

A majority decision works at the Supreme Court but not in the ad hoc world of college justice empowered by Title IX, where schools are allowed to set their own standards.

Some schools do use a simple majority to find a student responsible. But Stanford is different and requires a 4-1 decision in cases involving a five-member panel.

And even that is less daunting than a new higher standard Stanford has adopted for the more common three-member disciplinary panel.

Unlike other schools that will find a student responsible on a majority decision, Stanford requires unanimity.

Victims’ rights groups claim that is unfair. But Stanford feels it is fair to the accused.

“Imagine a senior, who has paid four years of Stanford tuition,” said Provost John W. Etchemendy to the Times, explaining the need for protecting the accused.

“Being expelled is really a life-changing punishment,” he said. “I think we as an institution have a duty to take that very seriously.”

To Stanford’s credit, it shows a sensitivity to the accused that is seldom seen.

The simple fact is some accusers are less than truthful. Consensual becomes non-consensual in a memory or in consultation with an activist lawyer.

While I’m generally in support of the victim in these cases, the nature of these relatively new disciplinary boards is to make a victim out of both sides of the argument.

And this is before getting involved in the kangaroo court nature of the proceedings from evidentiary matters to the lack of cross-examination.

The system as it stands too often leaves bad tastes all around. The accused call out for due process. The accusers say the system is rigged.

And it is in fact rigged—on behalf of the school and the university.

It doesn’t want justice so much as a clean record of being a nice, happy and safe campus environment where everyone is getting all A’s and is not having consensual frat house sex. And all while the football team is winning bowl games, pumping up alum who line the school coffers and bleed school colors.

The fantasy needs to stop. Schools and universities should get out of the justice racket.

Accusers who claim sexual assault shouldn’t be seeking a reprimand against an accuser in the sub-lower court of college disciplinary boards.

There’s only one place for justice for all.

No doubt that system has its broken mechanical parts.

But in the interest of getting at the truth and justice, both sides have a better shot finding it in a court of law and not in the makeshift Title IX exercises that schools rely on these days.

Emil Guillermo is a journalist and commentator who writes for the civil rights organization, the Asian American Legal Defense and Education Fund at http://www.aaldef.org/blog