Harvard University’s W.E.B. DuBois Research Institute at the Hutchins Center celebrated the return of Dr. Cornel West to Harvard’s faculty yesterday via an inaugural Spring Colloquium headlined by West titled, “The Trump Era: Hope in a Time of Escalating Despair.” In his introduction of West, Dr. Lawrence Bobo, W. E. B. Du Bois Professor of the Social Sciences at Harvard University, seemed to capture the flavor of the moment.

“Today, as you can all sense and feel, marks a new beginning. And a rebirth of the most welcome kind. …  It is just astonishing redemption, in a way. It’s a great day.”

Bobo was seemingly alluding to the circumstances surrounding West’s prior departure from Harvard for Princeton University in 2002 following a public row with then-Harvard President Lawrence Summers, who questioned the value of West’s scholarship. Bobo and his wife, Dr. Marcyliena Morgan, also left the Harvard faculty for Stanford University in 2004 after Summers denied Morgan tenure despite the unanimous recommendation of her Harvard African-American studies colleagues. Morgan and Bobo returned to Harvard’s faculty in 2008 with Morgan’s tenure in hand. 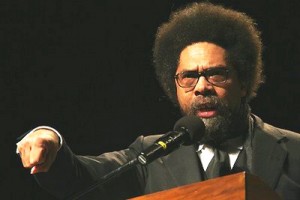 “Before that, an evil thing happened to Marcy Morgan. And we are blessed, in the history of Black people, I’m not talking about only at Harvard, I’m talking about in the academy, to be able to go and undo two evil things that happened to two great people, brilliant people; [they] did not deserve to be treated that way.”

In his lecture, West waxed introspective about the courage he believes is necessary to speak truth to power during Donald Trump’s presidency, noting that his parents “taught me to try to be a human being with integrity before the worms get my body. That’s the kind of commitment we need in Trump era.”

“I’ve already been trashed because I said that Trump is a gangster in character and a neo-fascist in content. … I was a gangster before I met Jesus and now I am a redeemed sinner with gangster proclivities. So I know what I’m talking about.”

West used some colorful examples of what he considered “gangster,” adding, “I’m not trying to engage in some kind of denigration of the public discourse because I’m putting myself on the same continuum. I got gangster proclivities, too.

In his lecture, West decried the “repressive apparatus” he believes Trump has employed, saying, “That’s the neo-fascist dimension of it. It’s not just the attack on the press, but he will be coming for some of us. We have to say like [W.E.B.] Du Bois, like Frederick Douglass, and like the nameless and anonymous freedom fighters of all colors, we can stand,” West said. “I refuse to normalize Donald Trump and his neo-fascist project.”

On the other hand, Gates mentioned as a prelude to a question to West that Trump seems to have a very close relationship with his children, belying a public perception for bullying.

For a recording of the live stream of the Spring Colloquium event headlined by West, who holds a distinguished joint faculty appointment in Harvard’s W.E.B. Du Bois Department of Afro-American Studies and the Harvard Divinity School, visit https://livestream.com/accounts/7639591/events/6897539.

The LGBT Politics of Christian Colleges