The report, which coincides with Trump’s executive order that threatens to cut off federal funds to communities that treat undocumented residents accused of crimes the same way they do U.S. citizens, adds fuel to the ongoing, smoldering debate over immigration reform.

Titled “The Effects of Sanctuary Policies on Crime and the Economy,” the report states that on average, 35.5 fewer crimes per 10,000 people occur in sanctuary counties than do in nonsanctuary counties. 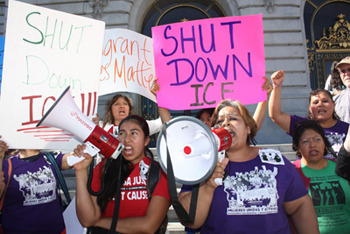 The types of counties examined for the report were large central metro, small metro, micropolitan and rural. Large central metro counties show the most pronounced difference with 65.4 fewer crimes per 10,000 than in nonsanctuary counties. Crime is defined as violence such as murder, rape, robbery, assaults, and property crime such as burglary, larceny, arson, and auto theft. Data studied came from 2015 FBI Uniform Crime Reports.

For years, local law enforcement agencies have argued against handing people over to federal immigration officials because it can jeopardize public safety. Immigrants who fear deportation are less likely to report crimes or to cooperate with police in criminal investigations.

Released last week, the report was authored by Dr. Tom Wong, an assistant professor of political science at the University of California, San Diego. The report was produced in partnership with, and released by, the Center for American Progress, the National Immigration Law Center, and the Immigrant Legal Resource Center.

Among the findings, the report states:

“The data support arguments made by law enforcement executives that communities are safer when law enforcement agencies do not become entangled in federal immigration enforcement efforts,” Wong’s report states. “When counties protect all of their residents, they see significant economic gains. Community members stay more engaged in the local economy. This in turn brings benefits.”

Latest in Fight Against Cheating – Proctoring Exams With Web Cams

An Obama Win Could Shift Balance in Cuba, Scholar Says