Speaking from prepared remarks at the National Legislative Summit of the Association of Community College Trustees (ACCT), DeVos characterized the nation’s community colleges as “nimble, inclusive and entrepreneurial.” 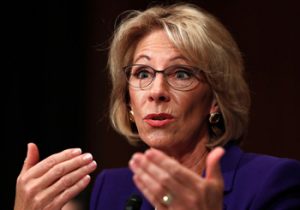 “ … You’re absolutely essential engines of workforce and economic development — locally and regionally,” DeVos told community college leaders. “You help identify and close the skills gap between employers and job seekers, so U.S. businesses and industries can thrive and expand.”

The secretary said she was aware of community colleges’ legislative priorities, and would work with community college leaders during the reauthorization of the Perkins Act and Higher Education Act. In terms of specific policy initiatives, DeVos singled out early college programs, which allow high school students to obtain college credits, for praise. She also gave a nod to increased Pell Grant flexibility.

In contrast to the furor that surrounded some of DeVos’ other recent public appearances, the crowd at the ACCT summit sent her off with a standing ovation. DeVos kept her remarks short, speaking no more than 10 minutes. She did not accept questions from conference attendees or reporters, but did allude to some of the controversy that threatened to engulf her confirmation as education secretary.

“And while some have characterized the flurry of attention around my confirmation in negative terms, I viewed it as expressions of passion … passionate parents and advocates who care deeply about their kids and about education,” she said. “I applaud it, and I know this same passion drives all of you.”

DeVos’ initial confirmation hearing precipitated several weeks of wrangling in the Senate. The final vote to confirm her as secretary came down to a historic 50-50 tie when two Republican senators broke party ranks to vote against her. The tie had to be broken by a vote from Vice President Mike Pence, the first time a vice president has had to make the final call on a Cabinet secretary’s confirmation.

David Baime, senior vice president for government relations and policy analysis for the American Association of Community Colleges (AACC), said that DeVos’ address was encouraging. “She didn’t spend a lot of time delving into policy details and we knew that was going to be the case, because she’s so fresh there, but I think people were really pretty excited by her remarks,” he said.

Baime said that community colleges hope to be a part of any potential infrastructure initiatives that the Trump administration might put forward. They are often the training ground for workers in vocational fields, such as construction or IT, which would be crucial in any major works campaign. In addition, community colleges themselves could use an infrastructure boost, Baime said.

“Our facilities in many places are in need of a lot of deferred maintenance and could really use outside capital that the states just are not in the position to provide in many areas,” he said.

Responding to DeVos’ emphasis on early college programs, Baime noted that most such programs are state initiatives. As a result, they do not fall under the purview of the federal government, although they are supported by federal investments in K-12 education, the Perkins Act, and Title IV funding.

“This is something we’ve supported — that is to say a federal investment or contribution in that area — but figuring out the best way to do that is something that people have wrestled with a little bit because it’s primarily a state and local role,” he said. “The federal government is never going to support all the dual enrollment programs going on across the country, they’re just too large, far too sweeping for that. So then the question is where does the federal government want to interject itself to make the biggest impact.”

The journey towards a better life requires an educational passport

Fight Flares in Arizona Over Tuition for Young Immigrants

Breaking Ground on the School of the Future