Though former President Barack Obama has only been out of office for about a month, historians and others have already begun to assess his impact. A group of historians rated him favorably at #12 out of 44 presidents recently, according to a recent C-SPAN survey. Tonight at 8 p.m. Eastern, the Smithsonian Channel premieres “The Obama Years: The Power of Words,” which assesses the impact of Obama’s rhetoric in light of history. 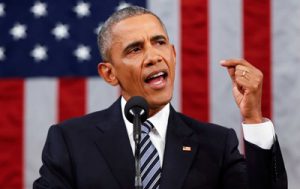 This documentary notes that President Obama delivered around 3,500 speeches and statements throughout his eight-year presidency, and what distinguishes him from some of his presidential predecessors was that he was an author before entering the White House, bringing to another level the impact of his speeches.

Though 2008 can be considered recent history, watching the emotion on the faces of the crowd in this documentary in clips of Obama’s 2008 Democratic presidential nomination acceptance speech does feel like much more than 8 ½ years ago, given the rancor seen in presidential politics of late. Certainly, at the close of Black History Month, this documentary is a timely reminder of the significant Black history made in our lifetimes, and will likely appeal to scholars of history and rhetoric and laymen alike.

Harry Rubenstein, a curator at the National Museum of American History, is quoted saying in the film regarding the Democratic presidential nomination acceptance speech, “Everybody realizes that this is one of those moments that marks a change in American history.”

This documentary examines the impact of Obama’s rhetoric through six major speeches: Obama’s breakout keynote address at the 2004 Democratic National Convention; his speech on race following the controversy surrounding some of the sermons preached by his former pastor, Jeremiah Wright; his speech accepting the Democratic presidential nomination in 2008; his speech at the prayer vigil following the Newtown, Conn., massacre; his speech in the shadow of the Edmund Pettus bridge in Selma, Ala. marking the 50th anniversary of Bloody Sunday; and his eulogy of the nine individuals killed during a prayer service at the Emanuel A.M.E. Church in Charleston, South Carolina.

“And when the Confederate Flag came down, it was a moment of healing and a moment where the words really did produce the outcome that you’re hoping they did,” Goodwin is quoted saying.