The University of Puerto Rico system has been locked in an indefinite, student-led strike since early April, echoing similar student-led protests in 2010. The protests in 2010 were in response to a proposed tuition hike. Today, the struggle is over the future of the UPR system.

Puerto Rico is deep in the midst of a major financial crisis years in the making. The island currently is $74 billion in debt and holds $49 billion in pension liabilities. 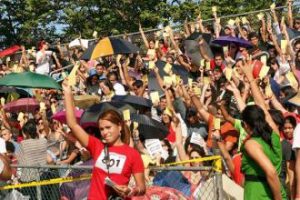 In an attempt to manage an increasingly untenable situation, the White House appointed a fiscal control board to oversee Puerto Rico’s financial concerns in August 2016. The fiscal control board, comprised of seven appointed officials and the elected governor of the island, are authorized to act through Congress’ Puerto Rico Oversight, Management, and Economic Stability Act (PROMESA). Unable to come to a resolution with creditors, the board filed for a form of bankruptcy on May 3.

Since its creation last August, the board’s gaze has fallen on publicly funded higher education on the island. In March, the board proposed trimming UPR’s budget to $450 million by 2021. As a result, the stakes are higher than ever for UPR’s future.

Currently, UPR receives approximately $800 million annually from the Puerto Rican government, representing around 80 percent of the overall university budget. Reducing the budget by nearly half over just a few years would most likely have severe consequences for the university system, which is currently the largest provider of higher education on the island.

Higher education is one of Puerto Rico’s strengths, Cordero-Guzman said. Due to broad public support for higher education, UPR has been able to keep the cost of tuition low, allowing Puerto Ricans to attend college at an affordable rate for decades.

Cordero-Guzman is highly familiar with UPR, having grown up on the Rio Piedras campus in San Juan. His grandmother, Dr. Adriana Ramu De Guzman, was the first female dean of the school of social sciences at UPR Rio Piedras.

“If there is one indicator where Puerto Rico has been able to catch up to the rest of the United States, it’s in education,” Cordero-Guzman said.

After the US invaded Puerto Rico in 1898, a census taken the following year revealed that upwards of 80 percent of the population could not read or write. Fast forward to 2017, the education levels in Puerto Rico have improved dramatically such that 1 in 4 adults have some college education.

“The University of Puerto Rico has played the single most important role in building the human capital base that has made it a competitive economy,” Cordero-Guzman said. “Of course, now there’s a crisis, but the university did not cause the crisis.”

Whether it wants to or not, Puerto Rico will have to confront some challenging realities, according to Dr. Orlando Sotomayor, professor of economics at UPR’s Mayagüez campus. Puerto Rico’s bankruptcy filing is the largest to date, dwarfing a similar proceeding to rescue Detroit, which previously was the largest municipal bankruptcy case on the books. Detroit filed for bankruptcy resolve $18 billion in bond and pension debt in 2013.

“The cut to UPR is very large, but again, the deficit is much larger,” Sotomayor said.

Consequently, Sotomayor said, the Puerto Rican government and fiscal control board must evaluate which services are most essential and weigh higher education against other public goods, such as pensions, health care, and maintaining a police force.

Compounding the fiscal crisis, Puerto Rico is also in the midst of a shift in demographics. The island’s public K-12 system is currently serving half the number of students it served when schools were at peak enrollment. Fewer children are being born, and others are leaving the island as part of the largest mass exodus the island has seen since the 1940s. The island has lost 10 percent of its population since 2000, according to the Pew Research Center.

Nudged along by changing demographics and the debt crisis, Puerto Rico will close 178 K-12 schools this week. As the board continues to look for ways to resolve the debt crisis, an estimated 300 schools may close.

UPR can expect a similar drop in prospective students within the next few decades, Sotomayor pointed out, as current K-12 students become college-age.

“I would say most reasonable people would say this is an opportunity to downsize and put emphasis on quality rather than quantity,” Sotomayor said. “The University of Puerto Rico has 11 campuses on a very small island that is only 110 miles long. All these colleges have different degrees of quality. I would think that most people would say we can downsize and put emphasis on better colleges and universities.”

According to Dr. José Luis Cruz, president of Lehman College of the City University of New York, narrowing access to UPR would represent a step backwards. Cruz attended UPR as an undergraduate and later served as vice president for students affairs of the UPR system. He was also formerly dean of academic affairs at the University of Puerto Rico-Mayagüez.

“The University of Puerto Rico has been for decades the principal vehicle of social and financial mobility for Puerto Ricans,” Cruz told Diverse.

“When you talk about diversity in Puerto Rico, one of the main issues is class,” Cruz said. “The university has had not only the ability to serve as an equalizer for society there, but the way it has been able to do that is not only by extending opportunities for those who are disadvantaged, but by putting them in the classroom with those who are more privileged.”

Given the uncertainty of what shape bankruptcy proceedings will ultimately take, the future of UPR is in the balance at the moment, with its leadership also in a state of flux. Back in February, 12 high-ranking members of UPR’s administration quit in response to calls to cut UPR’s government subsidy. One of the officials who quit was UPR’s president, Dr. Celeste Freytes.