Maya Rogers, a Howard University graduate student, has been named one of four student recipients of the $25,000 Beyoncé Knowles-Carter Formation Scholars Award. Winners of the merit-based award, issued by Beyoncé Knowles-Carter’s “BeyGOOD” initiative, were listed on beyonce.com last month.

Rogers’ selection is significant because she will be the first student in Howard’s history to graduate with a certificate in music therapy. She plans to use the Formation scholarship to complete her post-baccalaureate program in 2018. 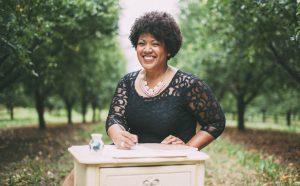 “She has a stellar academic record and is using her talents to empower others,” says Frederick. “We are pleased that she is recognized and rewarded for her commitment to service and academic excellence.”

Beyoncé announced the launch of her scholarship program on her website in celebration of the one-year anniversary of her album Lemonade in late April. The scholarship is “to encourage and support young women who are unafraid to think outside the box and are bold, creative, conscious and confident,” according to the statement on her website.

Students selected for the scholarship must be undergraduate or graduate students pursuing studies in creative arts, music, literature or African-American studies. Rogers met the criteria as a vocalist and songwriter using her passion to change the lives of others through music therapy.

When she found out that she won the Formation Scholars Award, Rogers says that she was full of laughter, joy and excitement “and a little bit of ‘Really?’” as she puts it.

Despite the modest self-doubt, Rogers is more than qualified, having grown up in a household of musicians in Berrien Springs, Michigan. “I just have always loved music,” she says. This passion is evident in the work done by her through her music-based initiative “Scat.her.joy” and in the music department at Howard.

“Maya exhibits the performance, songwriting and clinical skills required to be an elite practitioner in the field of music therapy,” says Dr. Anthony W. Randolph, chair of the Department of Music at Howard. “Ms. Rogers’ application of music therapy techniques, together with her outstanding performance capabilities, has been praised by site managers where she serves her music therapy practicum.”

Rogers has partnered with the Rhythm Arts Alliance and Street Poets Inc. in Los Angeles and has also performed as a vocalist at Pop-Up Gallery and Open Studios in Washington, D.C., and in concert recitals at Howard University.

Henrik Karlsson, coordinator of the music therapy program and Rogers’ advisor at Howard, says that the entire department is thrilled and proud to hear that she was chosen as a scholarship recipient. He adds that Rogers “demonstrates the mastery of the most important therapy skills.”

The music therapy program at Howard started in the early 1970s and initially only awarded bachelor’s degrees to undergraduate students. Rogers is the first to participate in the department’s post-baccalaureate program that qualifies a student to sit for the board certification exam in music therapy.

Rogers’ previous degrees include a dual Bachelor of Arts degree in film scoring and songwriting from Berklee College of Music and a post-baccalaureate degree in music education from Portland State University.

“She is an empathic listener, able to effectively respond verbally and musically to what the client brings,” Karlsson says. “Maya has the integrity, self-awareness and calm composure needed to create safety for patients when they are at their most vulnerable.”

Rogers’ background as a songwriter gives her the skills that a music therapist needs, Karlsson says. “The therapist has to be able to improvise, play by ear and structure the musical experience into something meaningful.”

In accordance with the themes of grief, pain, forgiveness and joy in Beyoncé’s album Lemonade, Karlsson and Rogers agree that music therapists help clients process difficult emotions. Music’s powerful role in healing and processing difficult emotions helped with Rogers’ own journey toward her degree.

In 2013, she suffered a traumatic brain injury and had to take time from her studies to heal cognitively. “The recovery process was really insightful in that my therapist knew that I was a musician, [and] decided to integrate music as much as possible,” she says.

Music therapy played a large role in her ability to read, write, play music and sing again. “Just the idea of going through something that’s really traumatic and making something beautiful out of that is inspiring as well,” she tells Diverse.

After two years of therapy, she started teaching private lessons to students again.

“Just naturally, the students that gravitated toward me were children with disabilities, people suffering from anxiety or ADHD, learning issues, autism … I just found it to be so rewarding,” Rogers says.

One Hawaiian chant that Rogers likes to sing is called E Ho Mai. It roughly translates to “Grant me the wisdom from above that comes through song,” she says. Now, she is on track to make history and change lives.

The Formation scholarship will bring Rogers “very close if not to the finish line,” of graduating from the program. “It sounds very cliché for me to say that ‘It’s such a great thing to give back,’ but it really, really, really is,” she says. “It takes you out of yourself and inspires other people to do the same.

“I now have this responsibility to make something wonderful happen for other people because someone gave me a chance to do something.” She adds that she plans to travel, teach workshops, practice her own music and run her own private music therapy practice in her home that integrates other expressions of healing, such as yoga, art and gardening.

The three other Formation Scholars award winners — from participating schools Berklee College of Music, Parsons School of Design and Spelman College — possess creative talent as well. The women selected from each institution demonstrated mastery in their fields, maintained a 3.5 or higher GPA and wrote an essay explaining how Beyoncé’s Lemonade inspired them to achieve their educational goals.

Formation scholar Sadiya Ramos is studying dance at the Boston Conservatory at Berklee. She is a native of Suffern, New York, and has been dancing since the age of six. “When you see her perform you see this kind of whole person communicating in a very powerful and profound way,” says Cathy Young, executive director of Boston Conservatory at Berklee. Ramos developed her style and performance skills as a teenager with Francois Perron at the French Academie of Ballet.

“Lemonade reinforced her beliefs that she can be directional, focused and multidimensional as an artist and that seeing Beyoncé confront inner struggles through her artistry gave Sadiya the belief that she could do that as well,” says Young.

Berklee received nearly 270 applications and selected the winner within two weeks with the help of Park Entertainment.

Avery Youngblood, the scholarship recipient at Parsons School of Design at The New School, is a 2016 Stanford University graduate. She is currently studying graphic design at Parsons and plans to translate her curiosity for creative design through language and social interaction.

Bria Paige, a junior at Spelman College, was named the fourth recipient of the Formation scholarship. As a well-rounded English major, Paige is involved in many activities and is Student Government Association secretary of academic affairs, co-president of the English club, a member of the Ethel Waddel Githii Honors Program and Alpha Lamba Delta Honor Society. Paige’s extracurricular activities did not interfere in her school work as she remained on the Dean’s List.

Celebrities such as Beyoncé are changing lives by investing in their fans’ college education. However, she is not the only celebrity impacting students’ lives.

Rihanna announced the launch of her own scholarship program in early May under her nonprofit, the Clara Lionel Foundation.

The star’s program will help first-year students from Brazil, Barbados, Cuba, Haiti, Grenada and Jamaica attend college in the United States. Applicants selected for the scholarship have the chance of receiving $5,000 to $50,000 and must have a cumulative GPA of a 2.5 on a 4.0 scale.

Rapper and singer Nicki Minaj also offered to pay her fans’ college tuition or loan debt through a post on the social media site Twitter. The rapper asked students to post their transcripts showing straight A’s and said that she would help provide financial assistance.

“Show me straight A’s that I can verify w/ur school and I’ll pay it. Who wants to join THAT contest?!?! Dead serious. Shld I set it up?” she tweeted.

Minaj later posted a list of eight students she had helped financially.